High school students competed with one another to see who could identify more electoral procedure violations during imaginary cases presented by a BIRN team of lawyers and experts. 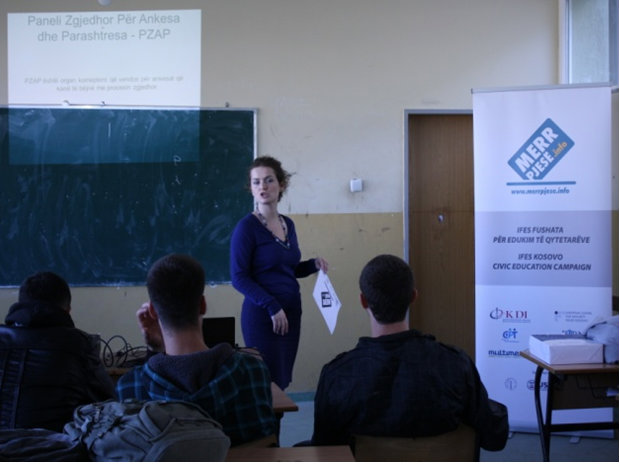 It was one part of 10 BIRN presentations on electoral procedures in the municipalities of Obiliq, Mitrovica, Drenas, Fushe Kosove, Suhareka, Kamenica, Prizren, Ferizaj, Hani i Elezit and in Gjilan that were held during October and November 2012.

These presentations gathered 200 first-time voters. They were trained on the electoral process focusing on election frauds, complaint procedures, available penalties, and competent institutions to deal with complaints.

The presentations focused on electoral complaint procedures and institutions. First, the BIRN team offered a comprehensive presentation on these procedures, followed with concrete examples of how BIRN has monitored elections.

The presentations lasted about an hour and were followed with an exercise, in which high school students were presented with an imaginary case.

The BIRN team worked closely with students in order to explain to them how to fill the complaint, what evidence is acceptable for ECAP, how to present evidence in ECAP and other legal elements of the complaints.

After students competed in finding electorial violations, trainers engaged them in discussion.

Questions included: How a witness of a violation during the election should report the case to the relevant institutions? How should a person react, in cases when he or she has been present at the time and place where the violation has occurred? Will there be ask risk to them for reporting the violations?