BIRN journalists Parim Olluri, Kreshnik Gashi and Alban Selimi have been awarded in Kosovo for their anti-corruption journalism. 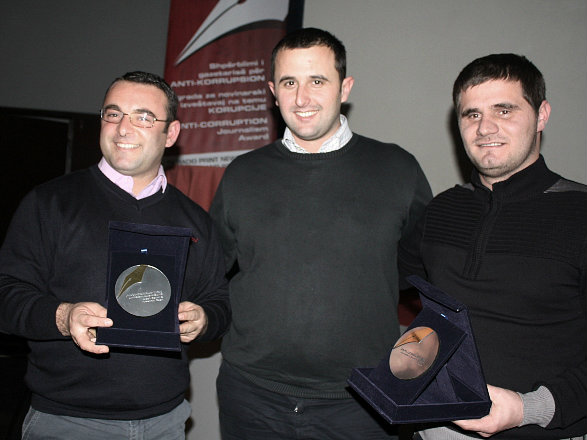 The United Nations Development Program, in collaboration with Kosovo’s Anti-Corruption Agency and the Association of Professional Journalists in Kosovo, awarded the prizes for the seventh year.

Parim Olluri, a journalist for BIRN’s Gazeta Jeta ne Kosovo, received the award for the best article on issues of corruption in online media.

He was recognized for a series of articles about Kosovo’s prime minister and several well-known businessmen who are close to him.

The jury said Olluri was honoured for the quality of his articles, the impact they had, and his persistence in following up on the stories.

Kreshnik Gashi and Alban Selimi received the award for best anti-corruption TV investigation. The two BIRN journalists produced a story on bribery within the ranks of the police, which was part of BIRN’s “Justice in Kosovo” program.

Imer Mushkolaj, executive director of the Association of Professional Journalists of Kosovo, told the journalists that their work is crucial to Kosovo’s development.