The key conclusion from the debate in Belgrade on Tuesday was that the recently-published EU Progress Report on Serbia was not too hard on the Serbian government, but it does not mention many problems and some of the conclusions and recommendations are identical to the 2013 Progress Report. 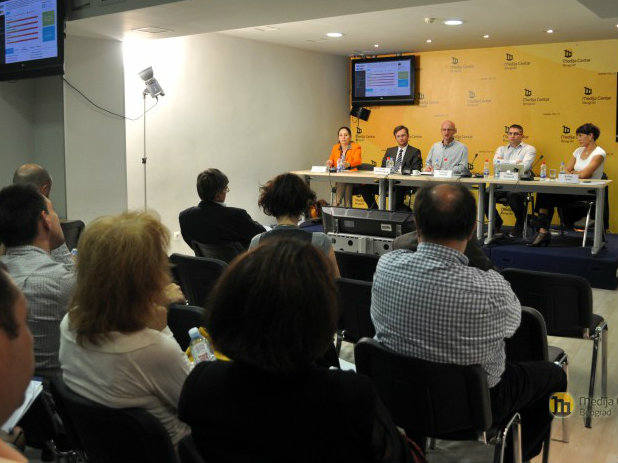 In an analysis that was presented at the debate, BIRN Serbia concluded that the report devoted considerable attention to the state of the economy and the rule of law, but topics related to health and education were only sporadically covered.

BIRN Serbia’s analysis pointed out slow and unsufficient reforms in the health and education fields, also highlighting that these sectors will not be too closely monitored by the EU and the majority of decisions will be left in the hands of domestic decision-makers.

The full analysis (in Serbian) is available here http://www.meravlade.rs/wp-content/uploads/2014/10/BIRN-ANALIZA-IZVE%C5%A0TAJA-EK-O-NAPRETKU-SRBIJE-ZA-2014.-GODINU.pdf

Speakers at the event were Goran Radosavljević, professor of public finances at the Faculty of Economy and Finances, Nemanja Nenadić, executive director of Transparency Serbia, Marina Mijatović, director of the NGO Law Scanner and Nikola Jovanović, president of the NGO Habče.

The main message that the European Commission gave the Serbian authorities in the progress report was related to the need for more efforts to ensure fiscal consolidation and acceleration of the necessary structural reforms. The high unemployment rate in Serbia, above 20 per cent, remains one of the crucial problems.

When it comes to corruption, according to the report, “there is a strong political will” to combat graft, but practical measures do not reflect this.