BIRN’s documentary The Majority Starts Here was screened for the first time in the United States on Thursday, at Columbia University in New York. 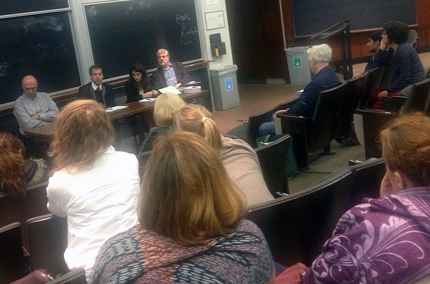 The public screening at the university’s Schemerhorne building was followed by a lively discussion between panellists and the audience about stability in the Balkan region and steps that must be taken in order to foster reconciliation and historical dialogue.

The event was attended by students of human rights, transitional justice and historical dialogue practitioners and professors, as well as consular representatives of Kosovo and Montenegro and the permanent representative of Bosnia and Herzegovina to the UN.

The debate explored questions about the current relations between Kosovo and Serbia in the light of the recent row over incidents at the Serbia-Albania football match. The role and efforts of the European Union in supporting reconciliation processes in the Western Balkans was also questioned. The topic of collective memory in the former Yugoslavia was also brought to the table, as well as the question of whether positive human stories from that era can aid the current situation and lead towards reconciliation.

A conclusion was that a broader space has to be created so that more people can be included in the reconciliation processes. This cross-regional space has to established with the help of states, as governments in the region have to start facing the past immediately, without waiting for pressure from Brussels in order to continue the process.

The panel was organised by Petar Subotin with help from the Institute for the Studies of Human Rights and the Harriman Institute.

BIRN’S next screeening of The Majority Starts Here will be held on November 3 at the National Press Club in Washington DC. For more information, follow this link.