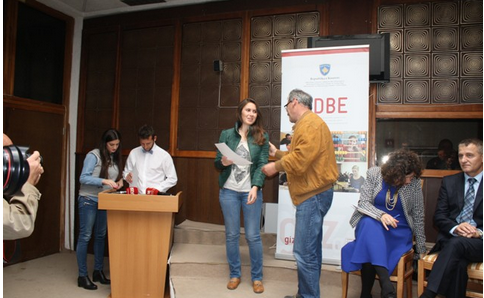 BIRN Kosovo journalists Merita Krasniqi and Njomza Salihu were awarded third prize in GIZ’s competition for investigative journalism on the education. The prize was administered jointly by the Kosovo Association of Journalists, who monitored the selection process.

The article, titled ”Influential People Win State Scholarships,” showed that thanks to a state agreement with “City College” in Greece, political advisers, relatives of public officials and the PDK deputy Fadil Demaku won scholarships. Krasniqi and Salihu won a 1,000 EURO prize for their story.

The first prize was given to three journalists of the newspaper “Koha Ditore.” Besnik Krasniqi was awarded for the article “Dodger Professors of UP, Vehbi Kajtazi with “Muj Rugova employed Esat Belajn and Gazmend Maliqi” and Salie Gajtani with the article “Ministry of Education Science and Technology makes a project for text messages at the expense of parents.”