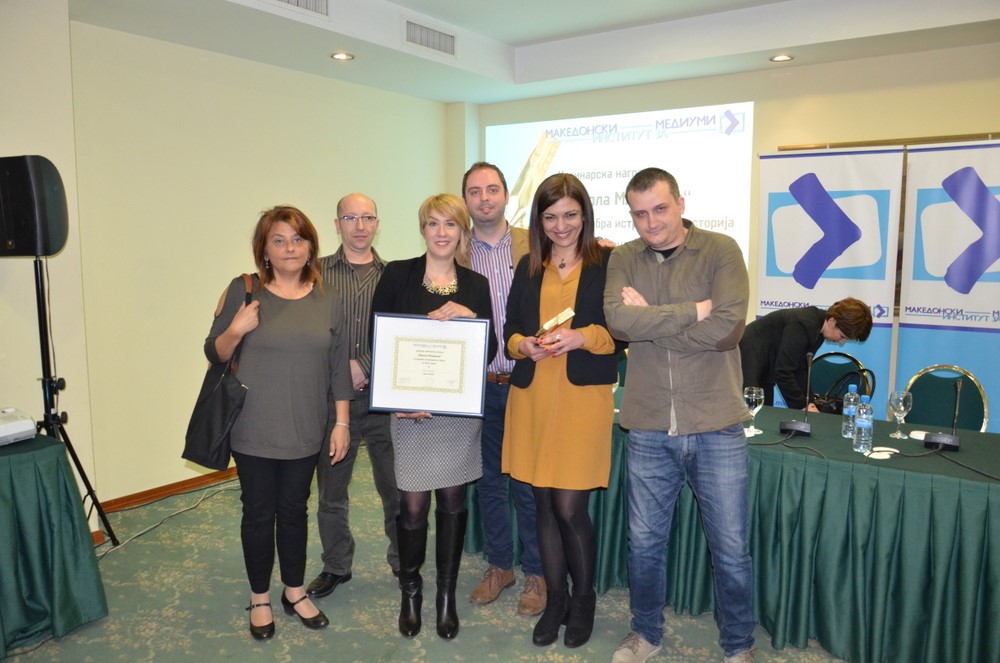 “Considering its scope,’Skopje Uncovered’ is a groundbreaking endeavour in investigative journalism in Macedonia. BIRN’s team has demonstrated an exquisite capacity for research, analysis and organising huge volume of data,” said Biljana Petkovska, director of the Macedonian Institute for Media, when she announced the first prize for BIRN.

“This award is recognition for teamwork – an incentive and a promise that you will see many more BIRN investigations,” said Meri Jordanovska, BIRN reporter at the awards ceremony in Skopje on Thursday.

The eight-month investigation draws on data procured through the Access to Public Information Act, the official web page of the Public Procurement Bureau, the “Skopje 2014” audit and other reports by the government.

When the grand revamp of the Macedonian capital was first announced back in 2010, the project, known as “Skopje 2014”, envisaged the construction of some 40 monuments, sculptures, facades and new buildings. Fast forward to 2015 and the number of buildings and monuments has tripled.

The price tag of Skopje’s new look has meanwhile also shot up, far surpassing the initially announced figure of €80 million, to around €634 million, BIRN’s investigation shows.

The “Skopje 2014 Uncovered” database documents and maps works built or under construction with the official contracts, authors’ fees, annexes and statistics on most contracted builders, sculptors, architects and foundries that participated in the project.

The second prize went to journalist Biljana Nikolovska from Telma TV for her documentary on a little girl who died while waiting for funds for surgery. The third prize was divided between team of NOVA TV website for their series on Telecom affair and SCOOP journalist Xhelal Neziri for an investigation on pollution.

Another investigation published on BIRN’s website Prizma by Aneta Dodevska on foreign investments received special mention by the jury.

The Macedonian Institute for Media first established the prize in 2001 to support investigative journalism in the country. Three years ago this award was named after Nikola Mladenov, a veteran editor and owner of Fokus weekly who died in a tragic car accident.