Serbian premier Aleksandar Vucic said he stood by his claim that BIRN lied in an investigation into a government contract, but insisted that he never describes independent media as ‘foreign mercenaries’. 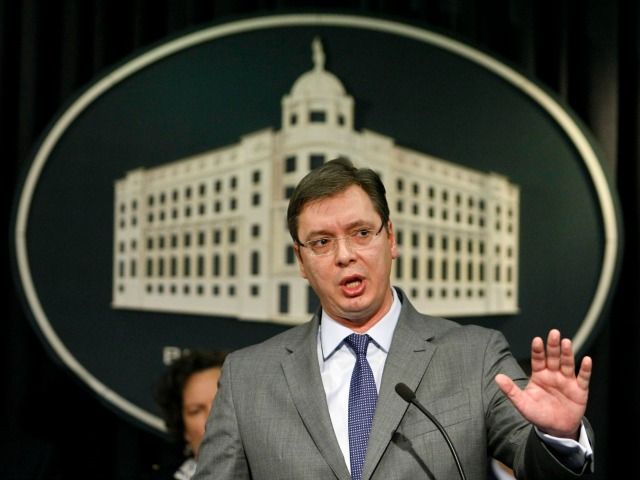 Vucic said on Monday that he was right to criticise the Balkan Investigative Reporting Network for its article last year alleging that a contract to clear flood water from Serbia’s Tamnava mine was awarded to a firm without prior experience of such work.

Asked about calling BIRN “liars” because of the article, Vucic said that he still has the same opinion about the investigation, but he may have used inappropriate language.

“Should I use the word ‘liars’? I suppose not. It is inappropriate for me as prime minister to use that word, but in essence, I did not said anything that is not true,” Vucic said in an interview with Serbian news portal Insajder.

Insajder journalist Irena Stevic asked Vucic to clarify what exactly was inaccurate in BIRN’s article, but he said he could not remember the details of the report.

However he said that the company awarded the contract to pump out the Tamnava mine, Energotehnika – Juzna Backa, lost about 1.5 million euros, which should prove there was no corruption.

Vucic said that he does not believes that he is responsible for attacks on independent media outlets by privately-owned pro-government media such as the tabloid Informer, Pink TV and Belgrade’s local television station Studio B.

“I think I went through the worst lynching. I don’t think I should answer for something that someone says in private media,” Vucic said.

Asked why foreign donations to independent media are depicted as anti-Serbian by pro-government outlets, which have also described independent journalists as traitors, Vucic said that he does not make that kind of accusation.

“You will not hear a story about treason and foreign mercenaries from me… that is simple not my vocabulary. I think those kind of qualifications belong to the past,” he said.

Insajder recently reported that over the past 15 years, the EU has given the Serbian government 2.6 billion euros in grants, but only gave Serbian media outlets 35 million euros during the same period.

But Vucic responded that the EU grants did not represent a major part of the state’s income.
“That kind of money is really small for the state… It is less than one per cent of the annual budget,” he said.

Since BIRN published its Tamnava investigation last year, it has unsuccessfully been trying to obtain information from Serbia’s state electricity provider, EPS, on the exact costs of pumping the water out of mine and how much money was paid to Energotehnika – Juzna Backa by the state.

BIRN requested EPS’s invoice for the service, as well documents from Energotehnika – Juzna Backa, on February 3, 2015.

EPS has never replied, and as a result has had to pay two fines of 160 euros and 1,500 euros imposed by the Commissioner for Information of Public Importance.