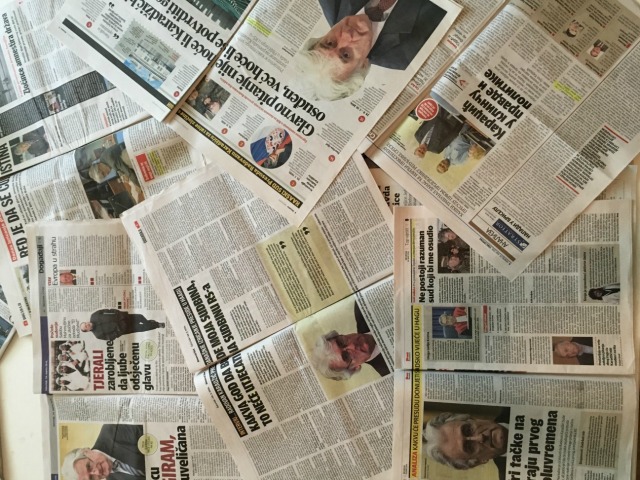 Denis Dzidic and Nedim Jahic spent three days in The Hague reporting live from the courtroom, giving interviews for international and Bosnian media outlets, interviewing Serge Brammertz, the chief prosecutor for the International Criminal Tribunal for the former Yugoslavia (ICTY), and recording numerous reactions from relevant commentators before and after the verdict was pronounced.

A day before the verdict, on March 23, BIRN published an exclusive interview with Karadzic, Radovan Karadzic: ‘I Expect to be Acquitted’.

The interview had widespread impact: it was republished 259 times in other media outlets, including Britain’s The Guardian and Slovenia’s siol.net and was on the home pages of every respected news portal in Bosnia and Herzegovina, Serbia, Croatia and Montenegro.

The interview was read on BIRN BiH website 6, 113 times, a record readership for an article on the site.

For the first time ever, BIRN BiH had a live blog dedicated to the verdict announcement, which was followed by 2,000 unique visitors.

The live blog was also part of the Croatian Jutarnji list live blog.

The BIRN BiH Facebook and Twitter accounts were also fully dedicated to the live coverage, disseminating information from The Hague, but also from local reporters in Sarajevo, Srebrenica, Bratunac, Prijedor and Banja Luka.

In the week of Karadzic’s verdict, BIRN BiH’s Facebook page reached 107,000 people; its Twitter account had 35,772 impressions on published posts; and website www.justice-report.com had more than 30,000 unique visitors – all records for all BIRN BiH platforms.

During the time they spent in The Hague, Denis Dzidic and Nedim Hasic published the following articles, which had 30 republications in other media outlets:

The BIRN BIH team also published the following articles while they were in The Hague: