The Balkan Investigative Reporting Network in Albania on May 18 launched a special webpage zgjedhje2015.report.al on its Albanian language portal Reporter.al, with in-depth information on the country’s territorial reform and the June 21 local elections. 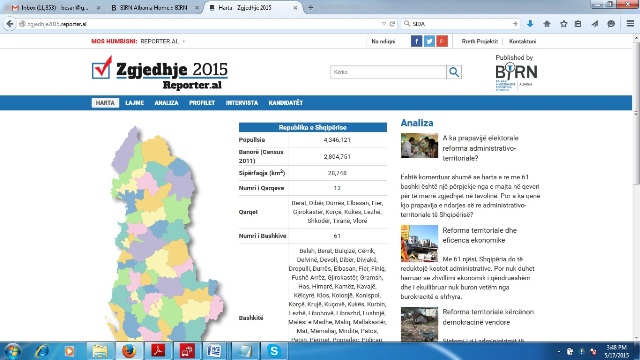 The page contains an interactive map of the new territorial division, which reduced the number of municipalities from 381 to 61, a profile of the each of the 61 new municipalities that emerged from the reform, six in depth analysis on the impact of the reform, and the CVs of election candidates running in the polls.

By June 5, the page will be enriched with interviews with mayoral candidates running in the 61 municipalities, which were based on a set of questions generated from interviews and roundtables with civil society activists, organizations and community leaders.

The questions were generated by in-depth interviews with more than 250 community leaders that BIRN Albania conducted in the above mentioned municipalities over the last two months, in order to identify citizens’ concerns about the problems and challenges their area faces.

The focus web page is part of the project on ‘Accountability in Local Governance through Citizen Participation and Civic Journalism’, supported by the US Embassy in Albania Democracy Small Grants Program, the Balkan Trust for Democracy (BTD) and the Swedish International Development Cooperation Agency (SIDA)

This project aims to bridge the gap between local voters and mayoral candidates ahead of the 2015 local elections, by strengthening the capacities of CSOs, grassroots organisations, activists and the media in order to identify and stimulate public debate on the key issues facing local communities.