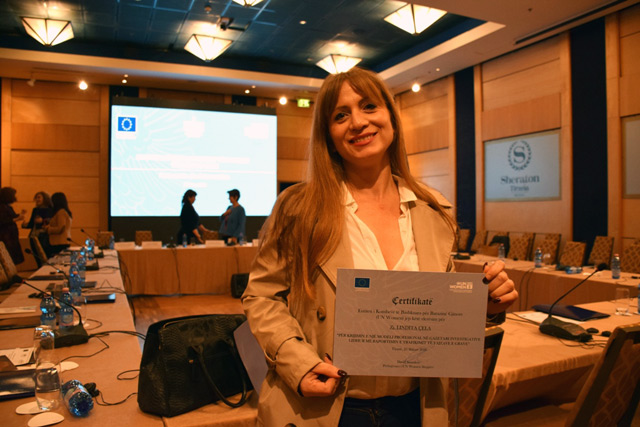 The Central European Initiative and the South East Europe Media Organisation, in special partnership with the Media Program South East Europe of the Konrad Adenauer Stiftung, on Wednesday announced that BIRN Albania journalist Lindita Cela is the winner of the CEI SEEMO Award for Outstanding Merits in Investigative Journalism 2016 in the category of “Professional Journalists”.

For over more than 15 years as a reporter she has been covering complex stories with a major impact in Albanian society, showing impressive courage and determination.

“Cela was awarded for her overall professional achievements and hard-hitting investigations exposing corruption scandals in the highest levels of power as well as revelations on Albania’s organised crime networks, stretching from the Accursed Mountains to the streets of Brussels,” the Central European Initiative said.

This year’s CEI-SEEMO prize in the category of “Young Professional Journalists” went to Artsiom Harbatsevich, from Minsk, Belarus. He has worked at Intex-press and Nasha Niva and was awarded for his investigative reporting that had significant impact on and repercussions for his country.

A Special Mention was assigned to Iurie Sănduță, director of RISE Moldova and member of the Organized Crime and Corruption Reporting Project, OCCRP.

Çela and Harbatsevich will receive the awards offered by the CEI  -4,000 and 1,000 euros respectively at the South East Europe Media Forum in Belgrade, Serbia, on 21-22 November 2016.

Call for Applications for Training in Fundraising