About 200 people attended the screening on October 31 of BIRN’s Balkan road-movie documentary ‘The Majority Starts Here’ in Belgrade. 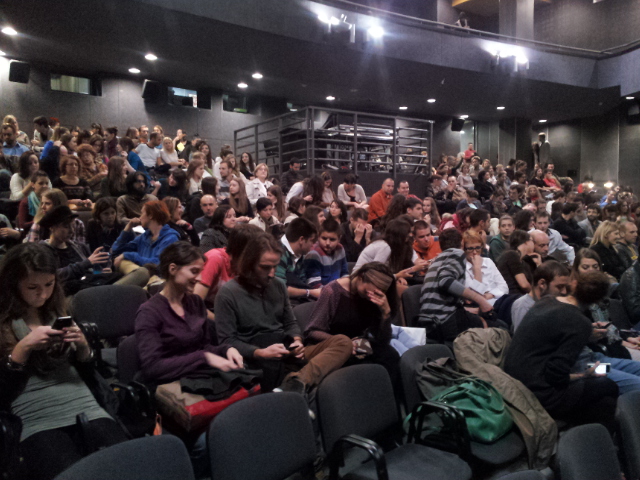 The Dom Omladine cinema was packed for the screening  and warm applause greeted the end of the film documentary about young people and the legacy of war in the former Yugoslavia.

‘The Majority Starts Here’ follows six young people from the former Yugoslavia who make a journey through the region, examining how the conflicts of the past, which they were too young to understand fully at the time, have influenced both their present and their prospects for the future.

Along the way, they come face-to-face with some of the ghosts of the past in the shape of impoverished wartime refugees, military veterans and unrepentant nationalists.

They also see how nationalist ideas which led to war have been reflected in the region’s economy, culture and even architecture, as they muse on how genuine tolerance and reconciliation can develop in places which have endured such divisive violence.

The film was premiered in Skopje on September 26, and then screened in Belgrade, Zagreb, Pristina, Sarajevo, Novi Sad, Podgorica and Tuzla.

A three-episode version of the documentary has been shown on television stations across the region including Macedonian cable TV station 24 VESTI, Sarajevo-based Al Jazeera Balkans and Montenegrin TV channel Vijesti.

‘The Majority Starts Here’ was produced by BIRN and directed by award-winning film-maker Lode Desmet. In 2006, Desmet and BIRN also produced the film ‘Does Anyone Have a Plan?’, about the future status of Kosovo.