The Belgrade-backed Serbian Citizens Initiative list candidate for mayor of Novo Brdo was the only one who did not take part in the TV debate of “Life in Kosovo.” Candidates from this party refused to participate in similar debates in Partes, Ranillug and Kllokot. 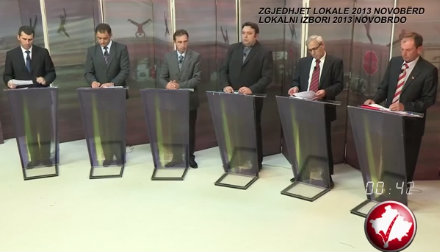 The mayoral candidates of the municipality of Novo Brdo, which debates on RTV2, on Monday, spared no promises for their fellow citizens.

Ranko Makic, of the SLS, praised his party for good governance in municipalities where it holds power. He implied that his governing of the municipalities would not be infused with politics, but would be committed to the welfare of citizens.

Nazmi Siarina, PDK’s candidate, said he would restructure the municipality by reducing the number of directors from nine to five. Siarina planed to create three separate municipal sectors, while Zeke Zeka from Vetevendosje promised 24-hour water and 50 flats for new couples with housing problems.

The current mayor, Ymer Bajrushi, of LDK, praised the work he has done as the mayor of this municipality in the last two mandates, saying he was running for the third term in order to continue with the good work.

The mayor has no plans for agriculture

Ymeri did not have any actual projects for the development of agriculture, while AAK’s mayoral candidate, Ymer Gashi accused Bajrush Avdullah of neglecting the Director of Agriculture’s participation in the allocation of subsidies to farmers. This, however is carried out directly by the deputy mayor who provides the other directors with a list specifying which farmers should receive agricultural subsidies.

In contracts to the above, other candidates did have plans for  agricultural development.  Jovanovic  said he would increase the budget of this sector by 50 percent and help build dairy milk farms.

Zeka also promised a budget increase for agriculture, while Siarina said he would establish a municipal office, which would help farmers design their projects by providing support from the municipal finances.

Makic said he would increase subsidies for agriculture and build small livestock farms.

The SLS representative complained about the municipal sewage network, considering it disastrous and stated that it needs reconstructing.

Zeka said that the sewage system is not functioning properly, citing the case of Llabjan village, where sewage flows into the private fields. Gazeta Jeta ne Kosove wrote about this issue in September.

Jovanovic and Gashi  guaranteed solutions to the sewage issue. Mayor Ymeri said that in general the sanitation network is functional, while acknowledging that there may be defects which require repair.

Novo Brdo  has no company that manages the water supply, although the current mayor implied that in 2011 the Kosovo government had decided that the Hidromorava  regional water company would manage the water supply.

Ymer complained that this responsibility has not been taken yet by this company, while  Siarina said Hidromorava would not be able to do so due to the high maintenance cost.

Zeka accused the current mayor for not convincing Hidromorava to take responsibility.

Candidates promised to open new clinics and extend the operating hours for the family medical center, but Ymer told his opponents not to promise things that are financially impossible.

The health center in Novo Brdo currently closes at 4 pm.