In the debate held on Thursday evening in Skenderaj, the current local government was accused of or criticized for the following: employing people on a partisan basis and through family connections, economic discrimination, presiding over a 67 percent unemployment rate, not dealing with the lack of running water and others. The mayoral candidates stated that the situation will change if they come to power. 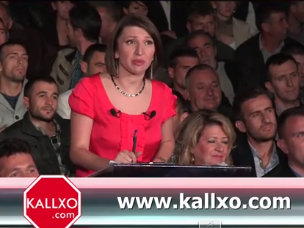 Most of the candidates showed zero enthusiasm during the Tuesday evening debate with the exception of the Vetevendosje candidate and the authorized representative of the current mayor Sami Lushtaku. Lushtaku was unable to attend the debate due to his detention on suspicion of war crimes.

Fadil Nura, representing  Lushtaku, was confronted about employing members of his family.

The mayoral candidates tackled the main problems of the Municipality of Skenderaj starting from the high unemployment rate of 67 percent, lack of running water, lack of cemeteries and appropriate facilities promised for families of war veterans or martyrs.

Nura, the deputy mayor of the Municipality of Skenderaj, was accused of hiring Lushtakus’s wife, sister and brother, without adequate qualifications relevant to the position.

Nura initially hired the mayor’s wife, Qamile Lushtaku, as a teacher in primary school in Kline e Eperme,  then later on in the secondary professional school in Skenderaj, without any required training.

He also employed the mayor’s brother at the same school although he did did not qualify for the job position.

Nura also used his political influence to employ his sister, too. She got a job position at the children with special needs school in Prekaz. Like the previously mentioned family members, she too didn’t have the required qualification at the time of employment.

However, Nura denied these allegations insisting his family members had the required qualifications.

Nura said the current government paved all roads of the town and this good practice will continue during the next mandate.

Skenderaj citizens were curious to know more about the governing program of Ajnishahe Shala- Halimi representing Vetevendosje. Shala was once a close associate of Lushtaku, but is currently known to be the biggest critic to his local government.

According to citizens of Skenderaj,  Shala-Halimi had cooperated with  Lushtaku on several issues, including the petition for the removal of an imam from a village near Skenderaj. Shala–Halimi was supported by the current mayor and succeeded in imam’s removal. People were interested to know about the hostility between Shala-Halimi and the mayor of Skenderaj, considering that Shala-Halimi’s husband is employed in the same municipality.

But Vetevendosje’s candidate, known for her work in human rights and gender equality, reasoned that the cooperation was in the public interest.

During the debate, Shala – Halimi was often interrupted by applause from the people attending the debate held in the hall of the Hasan Prishtina House of Culture “in Skenderaj.

“Anathematized” by the municipality

The candidate of the Democratic League of Kosovo (LDK) in Skenderaj, Cene Behrami, accused the current local government for discriminating against his village, Klina e Mesme.

According to Behrami, residents of this village have always been tagged as supporters of LDK and economically discriminated as a result. According to Behrami and other citizens from Kline e Mesme, the village lacks paved roads, although the works have begun two days prior to the debate.

Residents of the village have disrupted the work due to the fact that the village lacks sewage, which needs installing before the road pavement is done.

Nura  initially hesitated to say whether the work has started in the village. He justified the lack of investments in this village by stating that the municipality has invested in villages one after another and now it is Klina e Mesme’s turn for investments.

Cene Behrami promised that 30 percent of the municipal budget will be spent on the water supply network for the municipality of Skenderaj.

The candidate who doesn’t know how to open an email

One of the questions asked by citizens present at the debate was whether AAK’s mayoral candidate, Qazim Xani, knows how to communicate through email. Xani acknowledged the fact that he doesn’t use an email to communicate but that this wont restrict him in leading the local government in the next four years.

Abandoned by his members

AKR’s candidate, Ramiz Polaci, unveiled his government program too. However, citizens were more interested to know why AKR members abandoned him and the party in 2007.

BIRN investigations, confirmed by former members of the party’s presidency, say 11 members of the AKR presidency abandoned the party in 2007 on the grounds that Ramiz Polaci had misused the campaign funds at that time for his personal benefits.

Ramiz Polaci, however, denied these accusations saying he is not the reason why members of this party abandoned him and the party. According to him,  AKR is a big political subject and anyone is free to join or leave it.

The Social Movement of Kosovo’s candidate, Musli Ahmeti, did not attend the debate in Skenderaj due to the health reasons.