This year’s Balkan Fellowship for Journalistic Excellence gets underway, as ten journalists attend an opening seminar in the Austrian capital. 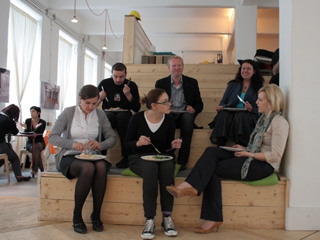 The 2011 Balkan Fellowship for Journalistic Excellence programme got under way on Tuesday, as ten journalists from across the region attended an opening seminar in Vienna.

Speakers included Christoph Prantner, head of the foreign desk of Der Standard, the leading Austrian daily newspaper and Igor Stiks, writer, academic and post-doctoral research fellow at the University of Edinburgh’s Europeanization of Citizenship in the Successor States of the Former Yugoslavia faculty.

This year’s event is being held at the Hub Vienna – a new meeting space in the centre of town that describes itself as “an inspiring place for people with ideas for a better world to work, meet, learn [and] connect”.

“I was impressed with the Hub Vienna venue – it’s a new way of organising seminars that puts people in a different mood because you don’t feel like you are at a seminar. You feel you are not supposed to just listen – it makes you want to participate actively in discussions,” said Jelena Kulidzan, a fellow from Montenegro.

“I was also impressed by Igor Stiks’ address; he was a very good speaker who managed to make a long and detailed presentation on complex citizenship issues accessible and gripping. I also enjoyed Christoph Prantner’s presentation, it is nice to find out how other media function and see everything they need to ensure they reach and maintain high editorial standards.”

Dollores Benezic, a fellow from Romania, pointed out the first day of the seminar coincided with World Press Freedom Day.

“Today was a very good World Press Freedom Day. I heard about a newspaper [Der Standard] that sounds like THE newspaper for me. These days in Romania, one hears constantly about curbs on media freedoms, publications going bust and controversial media buyouts,” said Benezic.

“So for me, a journalist from Romania, the first day of the seminar was a kind of breath of fresh, optimistic air. The Der Standard presentation was motivating and gave me hope that there is still a free media in the world.

“Igor’s research into citizenship in eastern Europe was also very interesting, as was the story of Erste Foundation’s beginnings,” she said.

Juliana Koleva, a fellow from Bulgaria, said: “Usually I’m a bit stressed on the first day of seminars, today was different and I think we managed to form a good team from the first day. I am also very impressed by other fellows’ topics and background – which is very interesting and useful for me.

“I also felt we were part of the proceedings, and not just passive listeners. I was impressed by Boris Marte from Erste Foundation; his explanation of how they manage to run all these projects across the region without imposing external directives and rules seems particularly helpful for the countries involved.”

The seminar continues until the end of the week, and speakers on Wednesday will include Zenet Mujic, senior adviser to the Organization for Security and Co-operation in Europe representative on media freedom and Eric Karstens, business development director at the European Journalism Centre.

The fellowship has been running for five years and the journalists taking part in this year’s programme are as follows:

The Balkan Fellowship for Journalistic Excellence, an initiative of the Robert Bosch Stiftung and ERSTE Foundation, in cooperation with the Balkan Investigative Reporting Network.