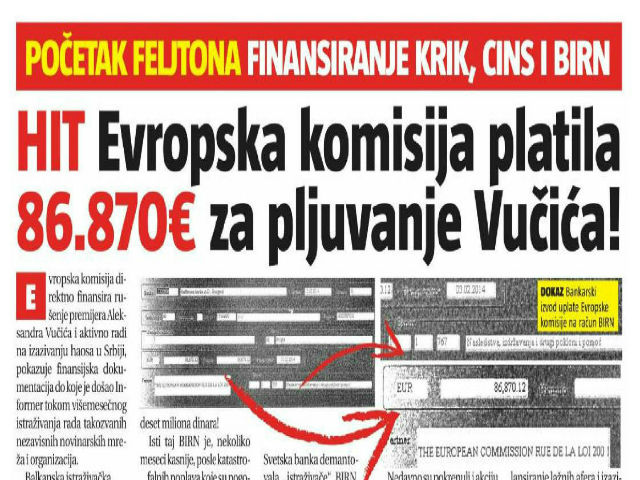 “It has been confirmed with certainty that the information on the influx [of money] on your account, published in Informer daily, has not come out of the bank. The published document is not the document from Raiffeisen bank,” the bank said in a statement given to BIRN on Tuesday.

“We don’t know on what way Informer daily came into the possession of the information,” the statement added.

The document in question – which is not legally obtainable – was published in the controversial tabloid on Monday and purports to be a BIRN financial statement from Raiffeisen Bank. The document was published as part of an Informer article claiming that the European Commission is “directly funding attempts to bring Vucic down and instigate chaos in Serbia.”

The story claimed that the European Commission has paid a total of €86, 870, 12 to BIRN “for spitting on Vucic”.

“The donation from the EU commission is just one of the payments made from abroad to news networks, who’s only purpose is launching false affairs and instigating chaos,” the Informer story alleged.

The bank has not commented on whether the document published by Informer was a forgery or if it was released by another source. In addition, the bank did not elaborate on why they are sure the document is not authentic.

Miodrag Vukovic, a lawyer and former Interior Ministry officer, said that obtaining financial statements is only possible for the authorities under very specific regulations and procedures. They can use the obtained documents in criminal procedures, “but if they are not used, they have to be destroyed”.

“No journalist in the regular procedure would be approved by a bank to get access to such information. It simply is not possible, because there is no basis on which you can call to get such information,” Vukovic said.

Informer published another article on Tuesday denouncing BIRN and two other independent media organizations, KRIK and CINS, claiming that foreign grants were given to all three on dates that coincide with the publication of “false affairs against people close to the government”.

The latest story has followed a series of defamatory allegations by Informer – which has links to Prime Minister Aleksandar Vucic – accusing BIRN, KRIK and CINS of acting as “foreign mercenaries” and trying to “bring down our government”.

The latest allegations appear on this occasion to be wrapped up in a tabloid feud between Informer and its Belgrade-based rival newspaper Kurir.

The situation escalated on November 8, when Informer’s editor in chief, Dragan Vucicevic, appeared in a special programme on the TV Pink channel called Bringing down Vucic. In the four-hour show he accused Kurir’s owner, Aleksandar Rodic, of being a racketeer, and BIRN, CINS and KRIK of “receiving money from abroad to bring down Vucic and to have a Serbia without a prime minister”.