Photographer Paul Lowe is presenting a BIRN-backed multimedia exhibition entitled ‘Watch Out, Sniper’, documenting the experiences of people who endured the dangers of Sarajevo’s so-called Sniper Alley during the 1992-95 siege. 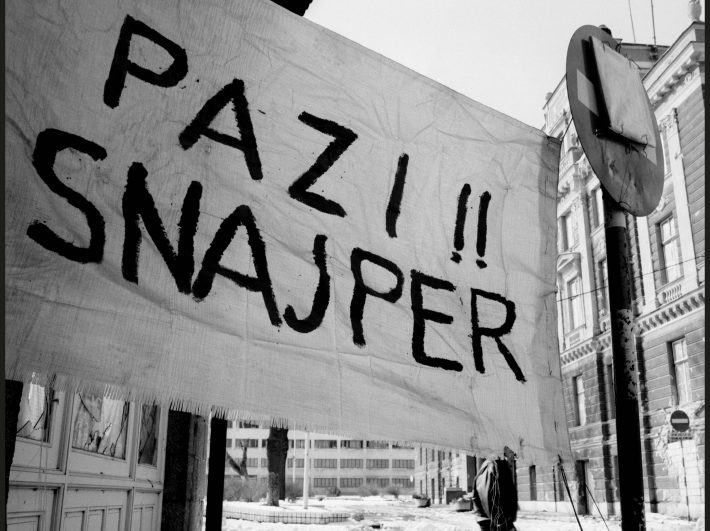 ‘Watch Out, Sniper’, a multimedia exhibition documenting the wartime siege of the Bosnian capital through photographs, research into Hague Tribunal archive material, witness testimonies and 3D modelling, opens at the Historical Museum of Bosnia and Herzegovina in Sarajevo on Thursday evening.

The exhibition is based on research carried out by Paul Lowe, an award-winning Sarajevo-based photographer who reported the Bosnian war and whose work has been published by Time, Newsweek, Life and The Sunday Times Magazine, among others.

The exhibition historically and geographically reconstructs the area in Sarajevo known during the 1992-95 siege as Sniper Alley – the informal name for Zmaja od Bosne Street and Mesa Selimovic Boulevard, the main boulevard in Sarajevo, which during the Bosnian war was lined with snipers’ posts, making it dangerous for civilians to traverse.

The mountains surrounding the city were also used for sniper positions by the Bosnian Serb Army.

“Paul Lowe photographed the Yugoslav wars from the beginning, he was here in Sarajevo during the siege and saw first-hand what was happening, not just in Sniper Alley, but in Bosnia and Herzegovina in general. He stayed on afterwards and saw the consequences of the war too,” said BIRN’s regional director, Marija Ristic.

The exhibition will not only feature Lowe’s work, but also images by other photographers such as Ron Haviv, Enric Marti, Rikard Larma and Gervasio Sanchez.

“Lowe has used his photography and pictures by others, but also documents, artistic installations and technology to create a compelling narrative of events. Through this combination of journalism, court findings, witness testimonies, 3D modelling and art we hope to bring new techniques of storytelling to the public, not just in Sarajevo, but elsewhere in the region too,” Ristic said.

The exhibition is opening on November 18 to commemorate the anniversary of the death of Nermin Divic, a boy killed by a sniper on the same day in 1994.

It is being organised as part of BIRN’s Balkan Transitional Justice granting scheme, which aims to encourage professionals in various fields to explore the archives of courts that dealt with war crime trials in the Balkans.

It is also supported by the Photography and the Archive Research Centre, University of the Arts London and Foundation VII.

‘Watch Out, Sniper’ will be on display at the Historical Museum of Bosnia and Herzegovina in Sarajevo until spring next year.