A debate about online freedom of expression entitled ‘New Trends or a Method of Suppressing Independent Journalism?’ was held in Sarajevo on November 12 by the Center for Investigative Journalism and BIRN Bosnia and Herzegovina. 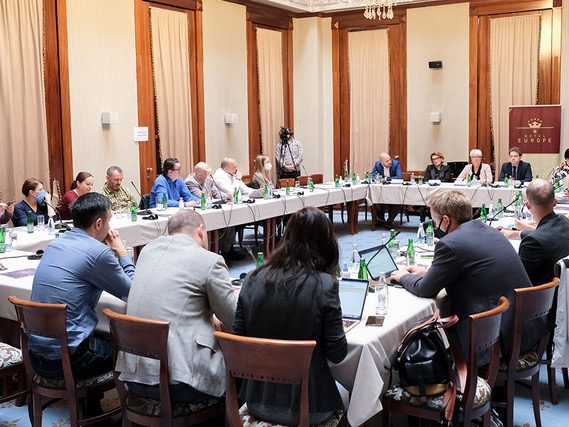 Participants at the debate argued that requests for removal of online content about perpetrators of criminal offences can amount to pressure on the media.

Due to insufficiently defined or selectively interpreted laws, the right to reply to or request the removal of an article can limit freedom of expression and serve as a tool of censorship, participants said.

Participants also argued that the publication of responses by people accused in media articles of wrongdoing should not provide a platform for their personal opinions.

Journalists and editors from media outlets in Bosnia and Herzegovina, journalism professors, legal experts and representatives of international organisations and embassies took part in the discussion.

The round-table discussion’s panellists included Nedim Ademovic, a lawyer and constitutional law expert, and Lejla Turcilo, a professor at the Faculty of Political Sciences in Sarajevo.

Turcilo pointed out that media are obliged to publish someone’s reply to an article if it corrects an error and contributes to impartiality. The decision is up to editorial teams, while the individuals submitting responses have the right to address a court if it has not been published.

Professional and responsible media outlets will not refuse to publish these responses if they correct an error, because this will provide the public with better quality information, she said.

However, polemics about a published article that insult or threaten a journalist or the media outlet shouldn’t be published as responses, Turcilo said.

She argued that this often represents an attempt to censor media content and threatens the freedom of journalists to report “about everyone and everything”.

Ademovic said that nobody has the right to ask media to publish their personal stance on a certain topic in the form of a response, but they have the right to correct an error, particularly if the journalist did not contact that person when preparing the article.

“One has the right to mitigate the damage through a denial correcting the key false allegations,” Ademovic said.

In some cases in Bosnia, people have the right to ask for specific verdicts to be deleted from their criminal records. The individual concerned then often ask media to articles mentioning their verdicts because they believe that such information, which can easily be found through a simple search on the internet, damages their reputation.

The panellists and discussion participants agreed that such requests do not have a legal basis and that media have no obligation to comply, particularly when it comes to checked and correct information.

“So these requests for the removal of articles about perpetrators of criminal offences following their removal from the criminal records actually represent a type of belated censorship or pressure on the media,” Turcilo said.

She said that those who have had falsehoods published about them should use defamation legislation.

Ademovic explained that there is no statutory right to request the removal of published articles. “The removal and elimination of the legal consequences of someone’s criminal status doesn’t imply the right to delete that something happened,” he said.