On May 30th, students from the University of Prishtina’s, UP, Faculty of Law engaged in a discussion with the Head of EU Office in Kosovo, Nataliya Apostolova, moderated by BIRN Kosovo Executive Director Jeta Xharra. 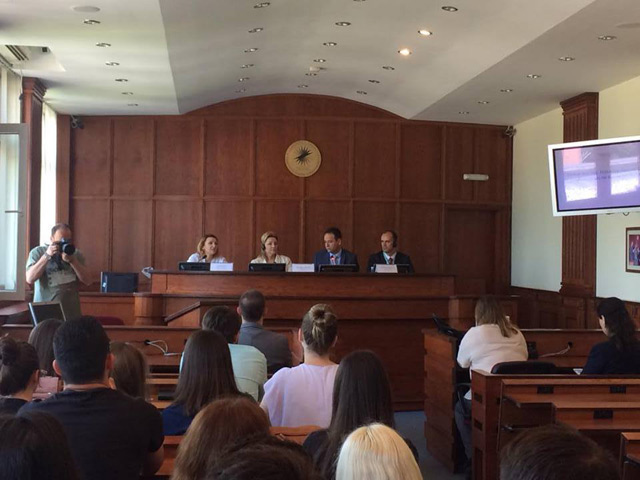 During the discussion, Apostolova provided a comprehensive overview of the relationship between Kosovo and the EU. She also congratulated Kosovo on its continuous commitment to advancing its path towards EU integration.

Apostolova, a firm believer that education remains a key driver of a democratic state’s long-term competiveness and growth, said that Kosovo should focus on improving the quality of education. Students presented their concerns about Kosovo’s current situation as one of the most isolated citizenship regimes in the world in terms of freedom of movement. Apostolova responded by highlighting the importance of visa liberalization for Kosovo’ citizens, and she confirmed the EU’s full support on further advancing this process. However, she noted that Kosovo should fulfill the remaining criteria, including the finalization of the border demarcation agreement with Montenegro, which is a condition for visa liberalization. The EU remains committed to Kosovo’s European future, she emphasized, and the EU is eager to see Kosovo seize this opportunity.

The guest speaker urged the participants to make use of their fundamental right to vote in the upcoming parliamentary elections.  It remains within the citizens’ responsibility, Apostolova said, to uphold Kosovo’s democracy by casting their choices for the political leaders. The failure to vote, she continued, not only implies consent to the existing public officeholders’ governance, but also equates to forfeiture of any right to complain about the current government officials, regardless of how incompetent or corrupt they might be.

The interactive debate was part of BIRN Kosovo’s series of forums organized in collaboration with the UP Faculty of Law.