MEPs have submitted tough questions to the European Commission about BIRN’s and Solomon’s report on EU-funded surveillance systems deployed in reception areas in Greece. 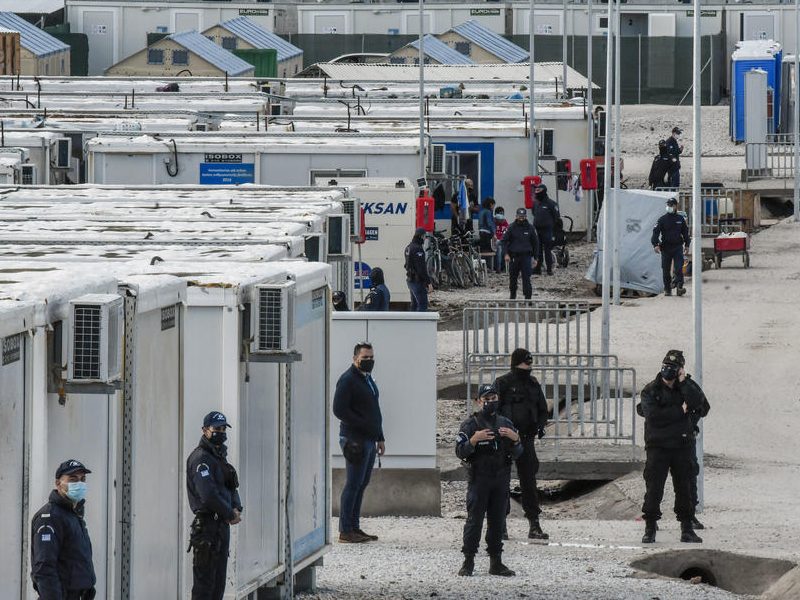 Photo: Security stand in the camp as Pope Francis delivers a speech during a meeting with refugees at the Reception and Identification Centre (RIC) in Mytilene on the island of Lesbos, Greece, 05 December 2021. Photo: EPA-EFE/LOUISA GOULIAMAKI POOL.

Members of the European Parliament sent written questions to the European Commission on September 16 about the EU-funded “Centaur” and “Hyperion” surveillance systems deployed in reception areas in Greece. Their questions came after BIRN and Greek investigative outlet Solomon published a joint investigation on this on September 9.

BIRN and Solomon revealed in “Asylum Surveillance Systems Launched in Greece without Data Safeguards” that the “Centaur” and “Hyperion” systems were crafted and initially implemented with funds from the EU’s Recovery and Resilience Facility – without prior recruitment of a Data Protection Officer at the Ministry of Migration and Asylum, a requirement under the GDPR, the EU’s General Data Protection Regulation, to ensure adequate oversight.

Nor were mandatory Data Protection Impact Assessments, DPIA, conducted in the design phase.

Tineke Strik, a member of the Group of the Greens, one of the eight MEPs who signed the questions to the Commission, published it yesterday on her Twitter account.

The MEPs asked the Commission how much money the EU spent on the two surveillance systems, from which funds this came, and how much funding has been or will be provided for similar systems.

BIRN and Solomon established that the planning of Hyperion and Centaur began in 2020. The Hyperion system monitors movement in and out of state-run asylum camps. Centaur deploys behavioral analysis algorithms and transmits CCTV and drone footage to a control room inside the Greek Ministry of Migration and Asylum.

The MEPs said the Greek government was clearly unwilling or unable to conduct an “independent investigation” following allegations of non-compliant expenditure of EU funds in violation of fundamental rights.

“Is the Commission taking action to reject cost reimbursement or retract funding for the Centaur and Hyperion projects? What measures are being taken to prevent future EU-funding of projects in violation of fundamental rights?” they added.