BIRN Kosovo’s team has been organizing election debates for almost a decade now, and this year, a new location will be tackled: BIRN Kosovo Director and debate moderator Jeta Xharra and her team are applying their format to municipal candidate debates in Albanian-majority municipalities in Macedonia. 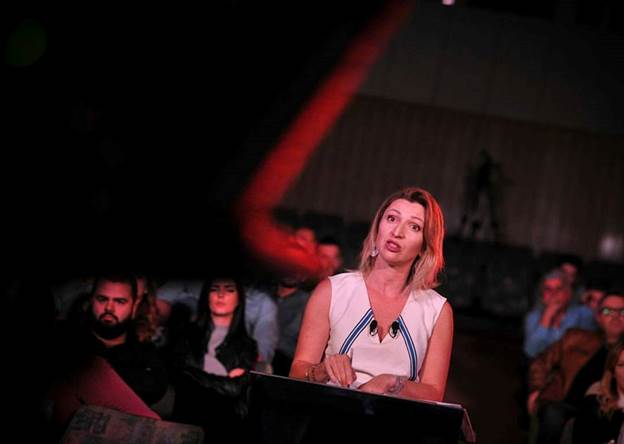 BIRN is bringing the #DebatPernime (#RealDebate) format for mayoral candidates of seven municipalities in Macedonia—Cair, Saraj, Struga, Tetovo, Gostivar, Kercova, and Debar. By hosting these debates, BIRN Kosovo aims to inform voters about the candidates’ platforms during the days leading up to the municipal elections in Macedonia, set for October 15.

BIRN’s product KALLXO.com, which is a well-trusted online anti-corruption platform, will be used as a tool for citizens of these municipalities to send debate questions and address their concerns regarding the governance of the municipalities they live in. BIRN Kosovo, along with its partners BIRN Macedonia, Portalb, Vistinomer, and Art Channel, have undertaken this approach in order to offer a transparent and accountable governing system in Albanian-majority municipalities.

The #DebatPernime format has proved to be successful in Kosovo, considering the large percentage of politicians who participate in the debates. Through candidate debates, BIRN aims to promote transparency and accountability in municipal governments, and to support public discourse.

During the debates, mayoral candidates will be given the equal opportunity to share their political programmes. All political parties, except for the former ruling VMRO-DMPNE led by ex-prime minister Nikola Gruevski, will participate in BIRN’s electoral debates.

The debates will be held every evening, from October 1-7, in Albanian language, and will stream live on KALLXO.com’s Facebook page and YouTube channel, as well as on the Macedonian TV programme TV Art Channel, which is headquartered in Tetova.

The #DebatPernime format has shown to be successful in viewership and citizens’ trust, as it offers a straight-forward way for municipal candidates to reflect on their development strategies for the municipalities they hope to govern.

Citizens are encouraged to submit questions or concerns through BIRN Kosovo’s anti-corruption platform, on KALLXO.com or through KALLXO.com’s mobile application, and via its Facebook channel.