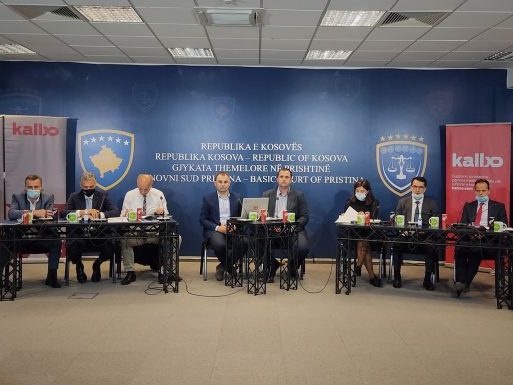 Justice Minister Albulena Haxhiu has praised the annual court monitoring report by BIRN in collaboration with Internews Kosova, entitled ‘Humouring Corruption’, which was published on Monday.

“This report reflects that in 40 judgments issued by the courts of Kosovo in 2020, the punishment policy in cases of corruption does not meet the requirements of the Criminal Code and the Code of Criminal Procedure, much less the Penal Policy Guide approved by the Supreme Court of Kosovo in 2018,” Haxhiu wrote on Facebook.

It highlights the light sentences handed down in corruption cases and the courts’ reasons for these sentences, in particular the large number of mitigating circumstances that are taken into account.

“In the face of this situation, the reforms we have launched are necessary and will be implemented,” she added.

She also stressed the importance of monitoring the justice system.

BIRN and Internews Kosova’s report was based on continuous monitoring of corruption cases in Kosovo’s courts in 2020.

Haxhiu attended the presentation of the report at a conference on Monday by the coordinator of BIRN and Internews Kosova’s legal office, Labinot Leposhtica.

Leposhtica said that taking mitigating circumstances into account without proper reasons means that sentences are imposed that are much lighter than they should be. He said that a special guide for handling corruption cases is needed to improve sentencing policy.