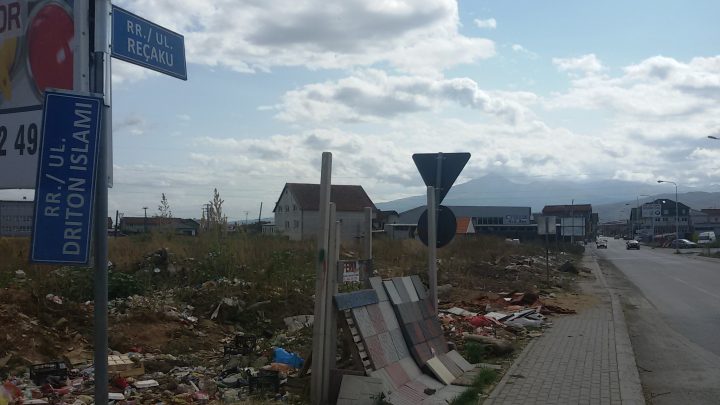 What will Ferizaj’s next mayor face on the first day in office?

Out of 45 villages in Ferizaj, 31 have problems with sewage.

Also, field research revealed that Ferizaj, one of Kosovo’s most populated cities, has only 130 public parking spaces. Furthermore, the municipality’s railroad tracks, where two people died this year, poses a danger to citizens.

BIRN investigations also revealed a construction and urban planning crisis in Ferizaj; the city has over 10 thousand illegal constructions.

In 2014, a decision was taken to initiate the amending and supplementing the regulatory plans, with an illegal basis, specifically focused on the examination of the construction coefficient for zones I and VIII. This was followed by consecutive legal, substantive and procedural violations, including more serious violations, such as the falsification of official documents.

The Ferizaj Mayor’s failure to intervene in a timely manner and to hold those responsible for illegal constructions accountable, has risked Ferizaj hundreds of thousands of euros of its budget, due to the deposit of the lawsuits regarding compensation for investors. These investors’ construction permits have been suspended due to the contestability of the revision process.
Investigations by corruption reporting platform KALLXO.com reveal that the

During 2017, three accidents occurred near the railroad tracks that run through the center of Ferizaj, two of which were fatal.

A KALLXO.com investigation shows that there is a lack of road safety signals in the area where the fatalities occurred, and the responsibility for this has continuously been transferred to and from the municipality to the public enterprise INFRAKOS.

The municipality casts the responsibility to INFRAKOS, the public enterprise for railroad management, while the latter holds the municipality responsible for the lack of road safety signs and traffic barriers.

Mayor Muharrem Svarqa, during the election campaign of November 2013, promised to take measures to prevent accidents near the railroad. However, over the past four years, the problem has not been addressed.

Field research has also revealed that Ferizaj’s lack of parking lots within the city is one of the many issues residents take issue with.

Based on KALLXO.com’s findings, the Municipality of Ferizaj ranks amongst the top for municipalties that lack sufficient parking spaces. Ferizaj has only two parking lots, with a total capacity of 130 cars.

Within the city, there are several plots of land that citizens have turned into private parking lots. The parking mayhem has given the city a bad image, especially because in some areas, sidewalks are used for parking

Ferizaj has a major issue with drinking water availability, especially evident in dozens of the municipality’s villages. Many villages lack a water-supply network, and several have no water supply despite investments in this area.

Moreover, investigations reveal that the drinking water supply in the city remains a major issue due to water cuts, especially during summer.

The municipality of Ferizaj lacks sewage collectors, and most of the waste is poured into rivers. In the Mirosalë village, sewage is poured close to some houses, private properties, and agricultural lands. There are no wastewater treatment plants, and none of the existing collectors clean the water in compliance with the given standards.

Field research reveals that some of Ferizaj’s villages, such as Nerodime and Koshare, lack of health centers. Residents of the given villages, in order to receive basic health services, have to travel to the city. The distance between Koshare and Ferizaj is 7 kilometers, while Nerodime to Ferizaj is 4-6 kilometers.

Almost all schools operate in two shifts, except two other schools currently working in one.

Research has also highlights connections between employment and politics. Specifically, Arta Tahiri-Beqa, at the beginning of the mandate, was a Vetevendosje Assembly member who then joined LDK, and this year, she was appointed as the director of the lower secondary school “Ramadan Rexhepi” in the Sojevë village.

Ferizaj has 20 thousand residents more than Gjilan, however, its revenues remain the same.

Ferizaj’s economy is known for its wood industry. Investigations show that in the municipality, taxes are used as bait for elections. Taxes were cut during the period when Mayor Aliu, from PDK, was in power. When Svarqa became the Mayor, taxes were once again restored to the previous amount. At the end of the mandate, Svarqa asked the Municipal Assembly to cut taxes, but the Assembly, supported by PDK, removed them completely.

Ferizaj has around 40 illegal waste deposits, while investigations shows that currently, 10 of them are located within the urban zones, which have no legal landfill. The investigation further shows that the municipality has not yet determined the location where the waste dump will be constructed.

Consequently, in villages and areas within the city, our researchers have identified waste dumping areas during their investigations. Such waste dumping occurs in the area called “The Eagle Circle”.

BIRN’s investigation shows that Ferizaj is amongst the municipalities dealing most with preventing violent extremism and indoctrination of young people by terrorist organizations.

Seven people from Ferizaj are in prison on charges of recruiting members of terrorist organizations or partaking in the war in Syria.

Investigations further reveal that the Municipality of Ferizaj, despite possessing several competences regarding the de-radicalization and integration of people previously involved in foreign conflicts, has done nothing in this regard.

The findings show that the municipality has failed to ensure that the centers for social work and health, the municipality’s psychologists, and the directorate of youth and sports are able to address issues faced by these individuals after their return from foreign conflict zones.