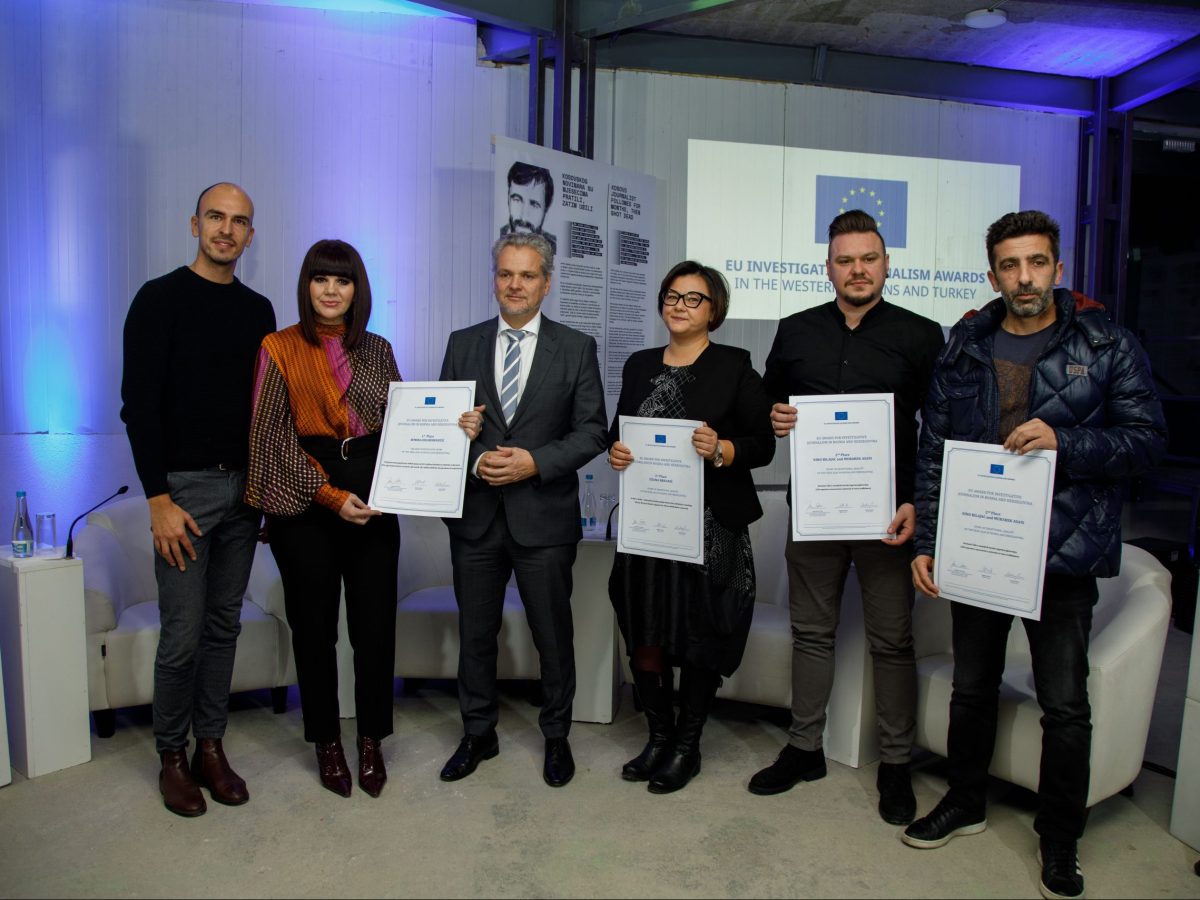 Semira Degirmendžić, Nino Bilajac, Mubarek Asani, and Džana Brkanić are the winners of the European Union’s Awards for Investigative Journalism in 2021 for stories published in 2020.

The awards were presented on Wednesday, December 15, at BIRN’s Reporters’ House in Sarajevo.

Degirmendžić won first prize for the best investigative story in 2020, “Agricultural farm got 10.5 million marks for the purchase of respirators”, which resonated strongly with the public last year.

In her comprehensive research, Degirmendzic revealed that the supplier of the respirators did not obtain the necessary permits from the Medicines Agency to import the respirators from China.

Together with Fikret Hodzic, owner of the supplier company Srebrna malina, Prime Minister Fadil Novalic and the head of the crisis staff, Fahrudin Solak were all involved in the affair.

Mubarek Asani and Nino Bilajac, journalists from the Centre for Investigative Journalism, won second prize for their story about a network of vote traffickers in the northern Brcko District.

“Vote selling network exposed by CIN reporters“ was conducted by the journalists in cooperation with the police and the Prosecutor’s Office, who infiltrated the organisers of the scam as intermediaries between the vote-seller and the local politician to whom these votes were supposed to bring victory.

Both the local politician and the seller were later arrested. This research also resulted in the arrest of eight others – three members of the local assembly members and five intermediaries.

The story, “Murky Bosnian Charity Appeals for African Wells Raise Concerns”, revealed the misuse of humanitarian funds and non-transparency of collecting and spending of more than 4 million Bosnian marks.

Inadequate controls over such humanitarian actions and associations is one of Moneyval’s recommendations to Bosnia, which is why this research was extremely timely.

It led to the termination of projects, the closure of the accounts on social media through which the funds were being collected, as well as the confessions of the main actors that evidence on the construction of wells in African countries was photoshopped.

The head of the EU Delegation and EU Special Representative in BiH Johann Sattler, addressing the audience in Sarajevo, emphasized the importance of the work of investigative journalists who reported on some of the irregularities that occurred during the pandemic.

Sattler highlighted that journalists are the ones who have raised important issues in society, including those related to the EU integration process.

In their explanation of this year’s awards, the jury composed of Zlatan Music, Davor Glavas and Slavoljub Scekic said that all three stories

were of crucial importance for Bosnia and the public.

The chairman of the jury, Music, praised the courage of the journalists, and their commitment to the topics, reflected in their research, and presentations with an abundance of details and data.

All three investigations were socially responsible and pointed out irregularities that the government not only ignored but in some cases also participated in, he said.

He added that the number of attacks on journalists was growing, due to the work they do, and he called on them to use all available protection mechanisms.

BIRN director Marija Ristic, said that we need responsible journalism today more than ever, to bring about change and have a greater impact on the public.

The awards were presented at the Reporters’ House, which will become a BIRN space and museum dedicated to journalists and media during the wars of the 1990s in the former Yugoslavia, and will also serve as a meeting and learning place for all journalists.

The EU Award for Investigative Journalism is awarded as part of the EU-funded project “Strengthening the Quality of News and Independent Journalism in the Western Balkans and Turkey” in 2019, 2020 and 2021 in candidate and potential candidate countries: Albania, Bosnia, Montenegro, Kosovo, Northern Macedonia, Serbia and Turkey. Awards are given for research stories published between 2018 and 2020. A total of 63 awards will be presented over a three-year period.

The awards in Bosnia and Herzegovina are coordinated by the BIRN Hub, which also runs a regional consortium.