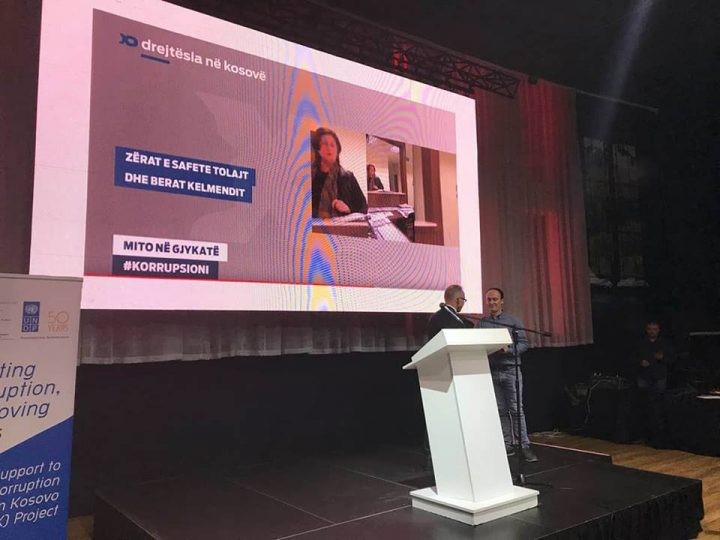 On December 8, the team behind the weekly BIRN Kosovo broadcast show “Justice in Kosovo”, was awarded the prize for “Best Anti-Corruption Story” by the United Nations Development Programme (UNDP Kosovo) and the Association of Journalists of Kosovo. The award was given to the team of Justice in Kosovo who conducted a thorough investigation on an alleged bribery case in the Basic Court of Deçan by its judge. The story, named “Bribery in the Court”, was presented through two episodes in the weekly program “Justice in Kosovo”.

The investigation into the Basic Court of Deçan revealed that Judge Safete Tolaj was involved in bribery. Her son would make efforts to bribe indicted persons, whose cases were being judged by Tolaj. KALLXO.com, BIRN Kosovo’s online anti-corruption platform, received a report from a citizen named Berat Kelmendi, who asserted that he was experiencing longer than usual times to have his case be resolved by judge Tolaj. Tolaj’s son, Fisnik, had then approached Kelmendi to speed up his case in exchange for 20,000 euros. Kelmendi had accepted the offer by secretly recording all instances where they were negotiating money in order to have Judge Tolaj solve the case faster. When Judge Tolaj was interviewed by Justice in Kosovo team, she acted surprised and claimed she was not aware of her son’s actions. However, she and her son were arrested the night before the second episode of Justice in Kosovo was broadcast. Several months after, on October 11, the Department for Heavy Crimes of the Basic Prosecutor’s Office in Peja issued an indictment against judge Tolaj under the charge of abuse of official duty.

Illustrating cases like these with evidence and their impact has resulted in strengthening the cooperation between KALLXO.com and the State Basic Prosecution, as well as the Kosovo Police. Justice in Kosovo and other BIRN Kosovo products will continue to pursue and investigate cases to uncover affairs of corruption and ensure those responsible are held accountable before legal institutions.