BIRN Kosovo has published a report titled “The Justice System’s Handling of Cases with Terrorism Charges in 2022” based on its direct monitoring of the justice system. The report is focused on the performance of Kosovo’s justice system in dealing with terrorism cases. 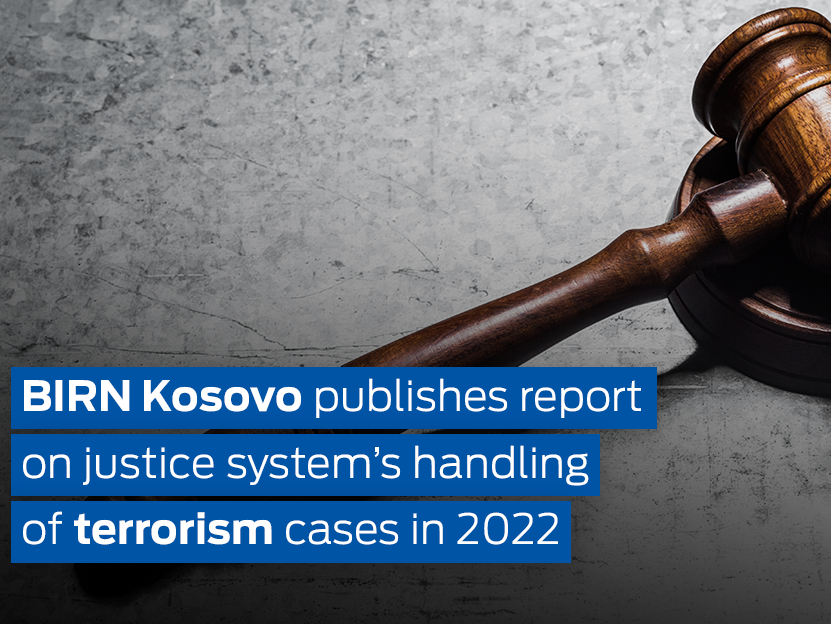 BIRN monitored terrorism cases from January 1, 2022, onwards using a specific methodology designed for the compilation of this report. The methodology included directly monitoring court hearings and analysing all decisions relating to the 12 terrorism cases that are part of the report.

Monitoring took place at the Special Department of the Basic Court in Prishtina, as the only competent court for handling such cases. The process included monitoring more than 20 court hearings and analysing other documents dealing with terrorism cases, from those documenting the investigative phase to those detailing the final decisions, in all instances of justice.

The report therefore reflects the progress of each case from the initial investigation stage onwards, including an assessment of the quality and impact of the in-depth investigation at the judicial appeals stage. Special attention is paid to the duration of court proceedings and the quality of decisions taken by the courts in these cases, which have been set as a priority for Kosovo’s justice system.

The report also includes individual summary analyses of all monitored cases, chronologically detailing the key moments in the handling of each case.

At the end of the report, BIRN included recommendations to justice institutions, such as the Kosovo Judicial Council, KJC, the Kosovo Prosecutorial Council, KPC, and the Academy of Justice, as well as the heads of the courts and prosecution offices.

The main recommendations are that the KJC, in cooperation with the Academy of Justice, organise supplementary training for judges and prosecutors who handle terrorism cases, with a particular focus on the nature of terrorism, the importance of publicising judgments, sentencing policies, drafting judgments, financial investigation, the identification of recruiters and money laundering.

BIRN also recommends that terrorism cases be prioritised by judges and that the KJC and heads of courts should take measures against judges responsible for excessively prolonging these cases.

Click here for the report on Albanian and English.

This activity is implemented as part of the “Media Strengthening the Rule of Law in Kosovo” project, supported by the Italian Ministry of Foreign Affairs and International Cooperation through the Italian embassy in Prishti