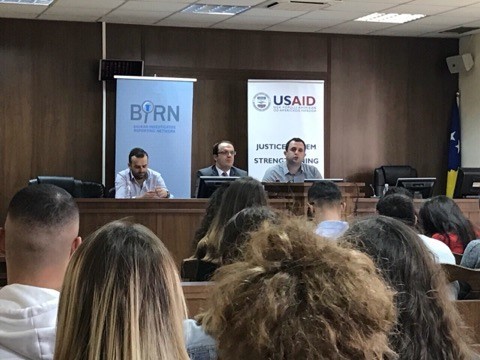 The discussion was moderated by BIRN Kosovo’s Chief Editor Kreshnik Gashi and hosted Afrim Shala, the Acting Head of the given court, Sabit Shkodra, the court spokesperson, and law students.

During the debate, panelists were granted the opportunity to brief the students on delivering court decisions to the public by using media and social networks. As such, the law students, currently enrolled at the Faculty of Law in the University of Gjilan “Kadri Zeka”, were informed on the role of social media and how it impacts the courts, including the judiciary’s response to the use and abuse of social media by judges, spokespersons, and other court staff.

The panelists also spoke about the importance of ensuring that judges and spokespersons comply with courtroom rules when publishing on social networks. The judges briefed the students regarding the audio and video recording devices in court hearings. Panelists argued that states should impose rational restrictions on the use of cameras and recording equipment in order to maintain the integrity of its proceedings and operate in favor of justice.

The panelists advocated for appropriate and effective use of social media to promote their work, activities, and services. Students were further provided with information on the risks associated with courts’ use of social media networks, such as the lack of court personnel expertise in social media on delivering court orders and decisions to the wider public, including the poor maintenance of updated court information.

BIRN Kosovo, under the “Increasing Transparecy in Kosovo’s Judicial System” Project, supported by USAID’s JSSP, will continue to conduct debates of similar nature in the coming months.