The Balkan Investigative Reporting Network has published an e-book about the Kosovo Specialist Chambers, aiming to increase understanding about the newly-established court that will try ex-guerrillas for crimes during and after the war. 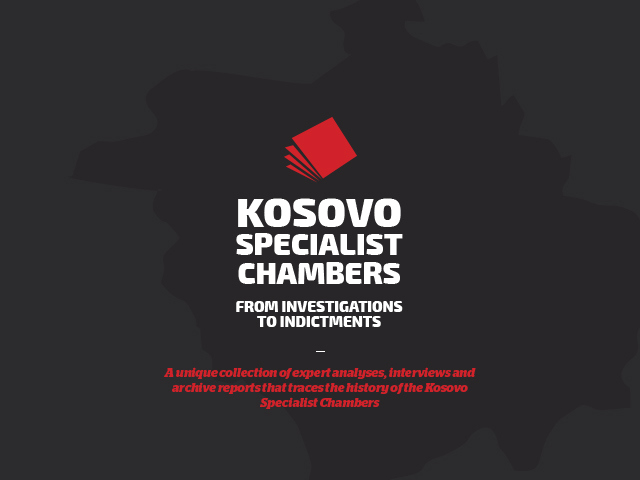 BIRN’s e-book, entitled ‘Kosovo Specialist Chambers: From Investigations to Indictments, published on October 31, includes expert analysis, interviews and archive reports that trace the history of the Kosovo Specialist Chambers from the initial Council of Europe investigation into wartime and post-war crimes by Kosovo Liberation Army fighters to the establishment of the new court to try them in The Hague.

Ahead of the first indictments, BIRN compiled its extensive archive on the subject into a comprehensive guide to how the court will work, what are its main challenges and what the key players have to say about the allegations and the forthcoming prosecutions.

The e-book can be downloaded free of charge in English, Albanian, Serbian and Macedonian.

“The establishment of the Kosovo Specialist Chambers has been marked by controversy – the court is seen as biased in Kosovo because it targets one ethnic group, while in Serbia it has been greeted as the last hope for justice for Kosovo’s Serbs. In this heated environment, we believe that this e-book can be a valuable tool for everyone who has been following this tortuous road towards justice,” said the book’s editor, Marija Ristic, director of BIRN’s Balkan Transitional Justice programme.

“We also hope that it will contribute a better understanding of the complex issues involved in bringing people to justice for the crimes of the wartime past – one of the core values of BIRN’s work in the area of transitional justice,” she added.

Although based in The Hague, the Specialist Chambers is legally part of Kosovo’s judicial system, but independent from the Kosovo judiciary and staffed by internationals, while all decisions and appointments related to the court will be made by the European Union.

The Specialist Chambers will have jurisdiction over crimes that occurred between January 1, 1998 until December 31, 2000, and that either were committed or commenced in Kosovo, meaning it can also prosecute crimes committed in Albania, as many of the prisoners who were taken away by the Kosovo Liberation Army were detained in camps in northern Albania.

It will hear cases arising from the EU Special Investigative Task Force report which said that unnamed KLA officials would face indictments for a “campaign of persecution” against Serbs, Roma and Kosovo Albanians believed to be collaborators with the Belgrade regime.

The SITF report was commissioned after the Council of Europe published an inquiry in 2011 which alleged that some senior Kosovo officials, including current President Hashim Thaci, were responsible for various human rights abuses.

Thaci strongly denied the allegations, and since he become president in February this year, he has publicly supported the establishment of the new court.

For the past 17 years since the war ended, the international community has been administrating justice in Kosovo, but its results have been poor – fewer than 20 final verdicts in war crimes cases. Serbia has prosecuted seven cases related to the Kosovo war.

However, it was believed that the Kosovo prosecution couldn’t handle sensitive cases against high officials, which was one of the reasons why the international community decided to establish the new court.

In order to access the e-book, you may need to download an e-book reader.
Here is our suggestion: https://fbreader.org