On June 16-17, BIRN Kosovo, in partnership with the International Press Institute, IPI, held its third and final two-day training course on tackling disinformation and establishing fact-checking methods. All three courses were organised as part of the EU-funded Solidifying the Resilience of Kosovo’s Current and Future Journalists project. 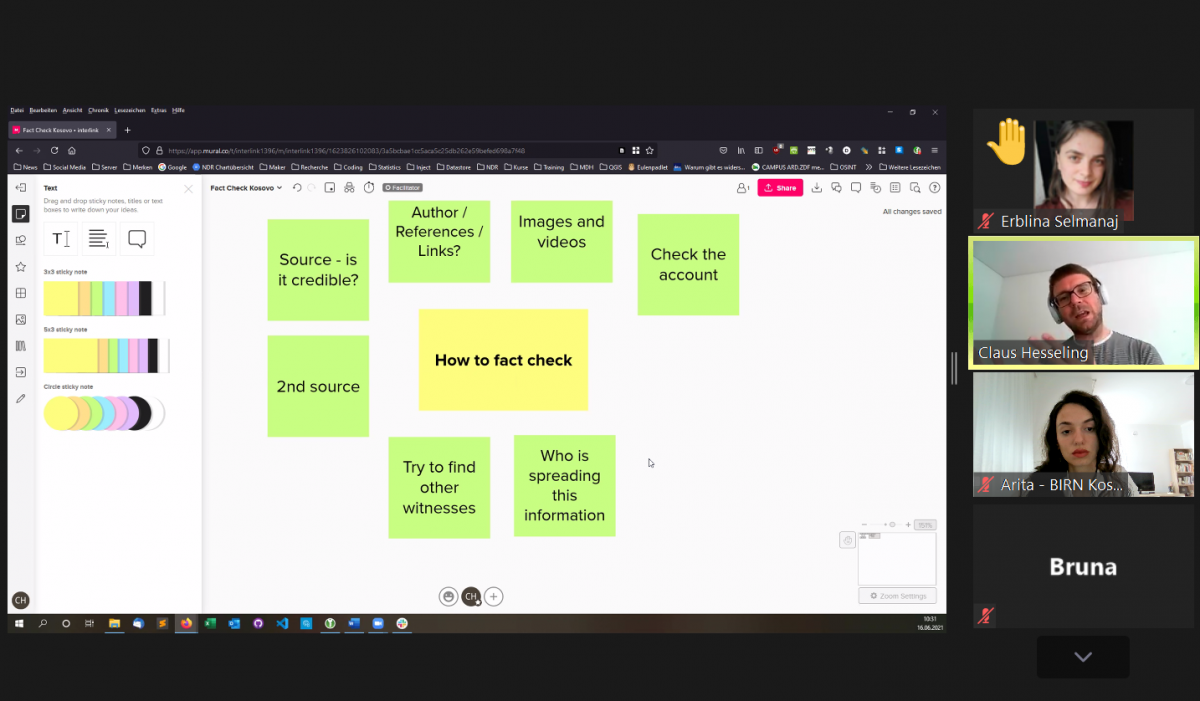 Across the course’s two days, participants interacted via video call with specialists from across Europe.

On the first day, Claus Hesseling, a journalist, lecturer and trainer from Germany, outlined the essential questions that journalists should ask themselves when dealing with misinformation. Hesseling explained various methods of photo verification, particularly for images originating from Twitter, Facebook, and Instagram, with participants learning practical skills on how to verify online images. He also demonstrated how to confirm the authenticity of video content, using practical exercises to see how investigative journalists respond to videos from unknown sources.

Meanwhile, the second day’s training was administered by journalists from a range of European countries, including Greece, Slovakia, and Lithuania.

The first session of the second day was held with Slovak journalist, Miroslava Sirotnikova, who gave an overview of the disinformation landscape in her country, and explained how the media and members of civil society are fighting back. Then, in the second session, Kostas Zapeiropoulos from Greece, co-founder of the Mediterranean Institute for Investigative Reporting and author of Alexander the Bot: The Twitter War for the Macedonian Soul, shared his insights on misinformation, which he identifies as a growing threat to democracy.

Following Zapeiropoulos was Sarah Hurtes, who spoke about the rampant levels of disinformation circling online, which she believes is the key reason that Europe is the world’s most vaccine-skeptic region.

Within an amorphous online ecosystem, Hurtes has managed to trace a sophisticated, organised cadre of professionals who work at national and cross-border level to amplify their key anti-vaccine message She shared her experience of identifying the inner workings of the anti-vaccination movement in Europe with the participants.

Later, Edgaras Savickas, an investigative journalist who has worked as a business reporter for Lithuania’s Delfi news portal for more than six years, shared the experience he gained during a major investigation into who is financing fake news in Lithuania, Latvia and Estonia. Following Savickas’ session, Darren Loucaides, a UK journalist based in Spain, shared his insight learned from a cross-border, four-country investigation into how disinformation campaigns by hostile foreign actors have affected Europe.

A total of 32 participants took part in the training, 23 of whom were women. BIRN and IPI believe that through this program, journalists from Kosovo received insight information on how to tackle fake news and misinformation, helping them to spot fake news through different tools and provide verified information.