BIRN Kosovo, in partnership with Internews Kosova and FindBug and supported by the US Embassy in Prishtina, observed International Fact-Checking Day with an in-person and webinar conference to discuss the risks of malign foreign influences and ways to counter them. 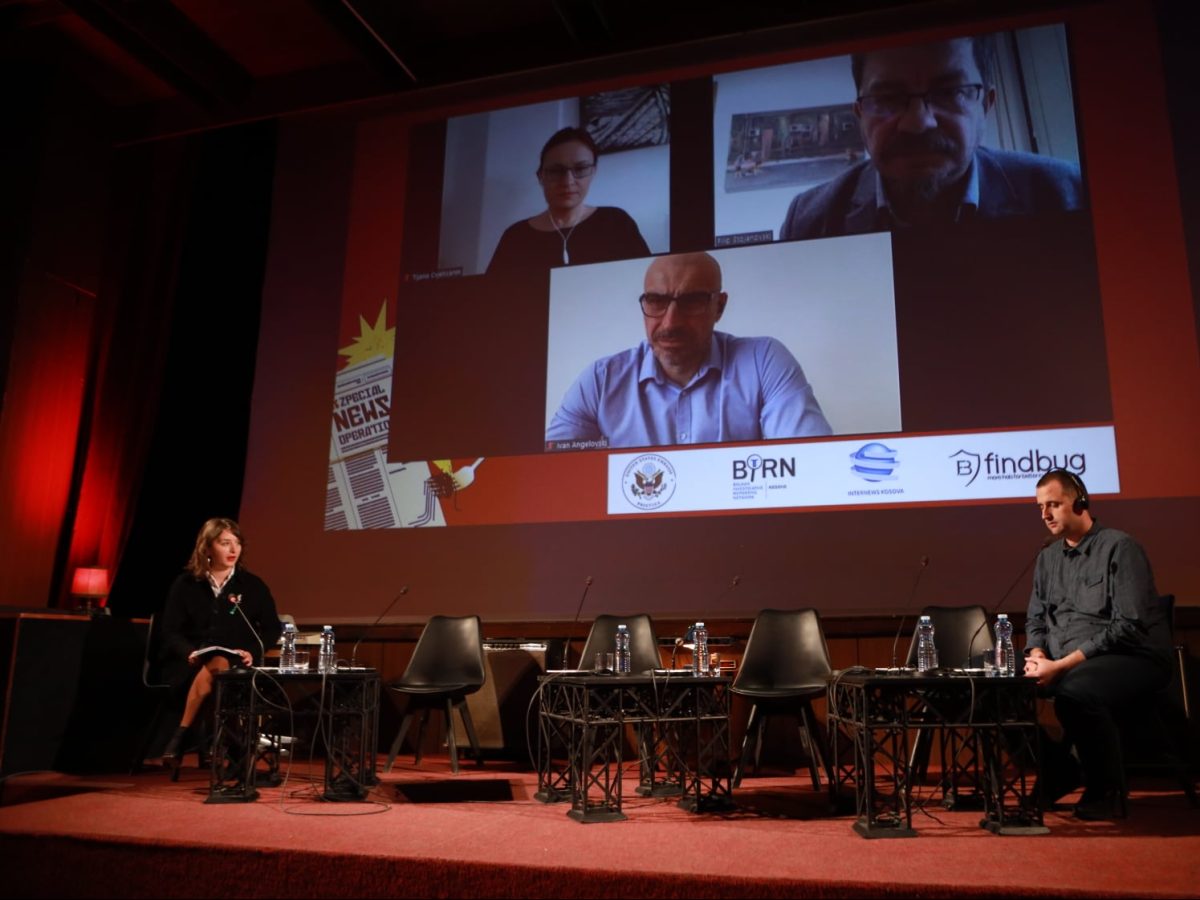 Held on Monday, April 4-th 2022, the afternoon of activities brought together journalists, media professionals, media regulators and technology experts to share their experience in robust fact-checking practices from around Kosovo, the region and the world.

More than 60 participants attended the event at Prishtina’s Kino Armata in person, with a similar number tuning in online via Zoom.

The conference was opened by BIRN Kosovo’s executive director Jeta Xharra, who highlighted the particular risks of misinformation, disinformation and fake news stemming from Russia, China and Turkey. She also paid tribute to all the journalists who are risking their lives to report from the ongoing war in Ukraine. “Eight journalists, mostly Ukrainians, but also internationals have died during the Russian invasion of Ukraine,” she said. “They have paid with their lives to bring us the truth”.

In the first of three panel discussions, Xharra was joined by representatives from leading global publications and institutions — Enock Nyariki from the International Fact-Checking Network (IFCN), Jasna Jelisić from the European External Action Service, Rainer Schüller from Der Standard in Austria, Ed Vulliamy from The Guardian/Observer in the UK, and Svitlana Slipchenko from VoxCheck at VOX Ukraine.

There was also a brief contribution from Maksym Skubenko, head of VOX Ukraine who is now a conscript of the Ukrainian army defending his country against Russia. Speaking from the frontline of the war, Skubenko highlighted the paramount importance of reporting accurate information and powerfully appealed for everyone present to ensure that the world doesn’t forget Russia’s actions in Ukraine and to make sure the world does not fall prey to Russian disinformation.

Other panelists highlighted the importance of fact-checkers working together as allies to share best practices, tools and reliable platforms that help combat the sheer volume of fake news in the current context.

Slipchenko added that the challenge as fact-based journalists is to counter malign narratives stemming from Russia with other, accurate narratives. “The latest example we had to deal with was the Russian narrative that there was no attack on the maternity hospital in Mariupol, when we clearly know what happened there”, she said.

Speaking from Kenya, Nyariki explained how fact-checkers globally had come together to create the public #UkraineFacts database, which includes verified reports about the war. “We knew that disinformation and misinformation would get out of control and spread throughout the world,” he said.

Jelisić pointed out how the battle against disinformation is a global one, and that the Western Balkans is not spared. “The Western Balkans, in comparison to the EU member states, is maybe more vulnerable to disinformation because the level of media literacy is lower, there is lower trust in institutions in general [and] the space for the functioning of independent professional media has been shrinking for a very long time”, she said. “So, when the same trend is hitting the region, the capacity of the Western Balkans to deal with it, to build resilience to it, is limited in comparison to the EU member states”.

Asked whether one should take comfort in the fact that we live in a day and age when everybody is able to debunk information by virtue of the vast availability of information and the widespread use of smartphones, Ed Vulliamy from the Guardian/Observer replied “There is indeed an avalanche of information, but it has no depth, it’s all surface.”

The second panel, “Lessons From the Region”, was moderated by Kosovo 2.0’s executive director, Besa Luci, who was joined by experts from around the Western Balkans — Tijana Cvjetićanin from Raskrivanje.ba who is also an IFCN board member; Ivan Angelovski, a regional investigative editor from BIRN and an associate producer with CBC Canada; Filip Stojanovski from Metamorphosis in North Macedonia; and Kreshnik Gashi from BIRN Kosovo’s Krypometër.

Participants focused on combating the challenges that face media and fact-checking outlets in the region in the context of the specific political and economic conditions within which they operate. They shared examples of how to boost media literacy and productive critical thinking within countries where education systems are lacking such fundamental teaching and discussed what the relationship should be between fact-checking experts and public policy makers.

Pointing to the dangerous false narratives that have emerged during the COVID-19 pandemic and the war in Ukraine, Stojanovski asserted that fact-checking is a matter of life and death. “This topic should be advanced and a solution found in the field of disinformation”, he said. “The Internet was created at an academic level to spread knowledge, and now it is used for purposes that go against freedom of expression — we are dealing with hate speech”.

Angelovski echoed similar sentiments. “Misinformation must be fought at every level and in the most accurate and professional way by presenting the facts”, he said.

Panellists particularly highlighted the importance of well-trained and experienced editors within newsrooms to ensure that information being published is properly verified and therefore accurate. They also answered questions from journalists and students in the audience on editorial and fact-checking processes, as well as the availability of fact-checking training in Kosovo.

Saraçini noted that in the past, governing regimes distributed fake news to the masses through a single medium and people believed whatever they were told but that today things are different. “There are multiple sources where citizens can get their information, which in and of itself is both a good thing and a bad thing”, she said. “While citizens have more sources of information, they are also more prone to falling prey to fake news and disinformation”.

Gashi highlighted that in Kosovo, there is outside influence on information, especially from sources financed by Russia, that aim to create insecurity and create panic, while there is also great effort focused on changing the historical narrative. “The other element is the internal influence supported by political parties and businesses in our country”, he said. “In Kosovo, the fact that there has been a tendency for political parties to produce false news about their opponents in order to take power should not be left unattended”.

Surroi suggested that credible local media that have been operating in Kosovo for a long time don’t allow themselves to be taken in by fake news because before publishing anything they verify their sources and ascertain whether what is being said is true or not. “With regard to fake news coming from abroad, we are trying to channel the type of information sources coming to us from abroad and of course we are heavily reliant on news agencies and international news companies that are known to be credible”, she said.

Acting director of RTK Ahmetxhekaj focused on recent changes at Kosovo’s public broadcaster and ways in which they are striving to improve the quality of their journalism output. “We are focused on having our own news produced by RTK, and less on getting news from other agencies and media”, he said.

Asked about the institutional response to the global spread of false narratives, Lazarević said that she was frustrated by censorship of information and misinformation and that this was not the solution to fighting disinformation and malign forces. “I am very radical in the sense that there should be no censorship in informing the public”, she said.