BIRN Kosovo held its second debate to present findings from its analysis of municipality audit reports, this time for the municipality of Prizren, on November 23. 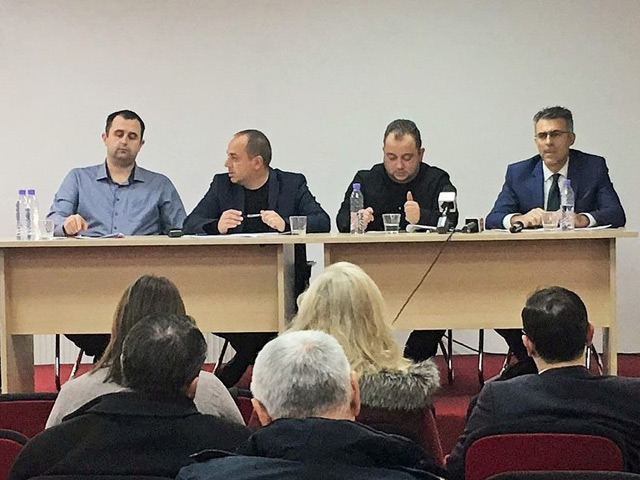 The outcomes of the analysis and monitoring were presented in an open debate with more than 20 participants from the municipality, the auditors and civil society, as well as local media including RTK and TV Prizreni.

Kreshnik Gashi, editor and moderator of BIRN Kosovo’s TV programme ‘Justice in Kosovo’, gave a brief presentation on the project and the findings of the analysis on the audit of the municipality.

The mayor of Prizren, Mytaher Haskuka, then discussed the situation with the implementation of recommendations from the National Audit Office.

Haskuka emphasised that the crucial issue for the municipality remains the managing of contracts with economic operators – suppliers of goods, works or services. Haskuka said the reason for this is the large number of contracts compared to the small number of directorate officials who have to deal with the contracts.

A representative of the National Audit Office, Ilir Salihu, was also present to answer questions from the panel and the audience.

Regarding the municipality of Prizren, Salihu said that activities that were planned have not been implemented, and advised that municipalities should be more careful when drafting action plans.

“I would like to emphasise an important thing… I think that neither the municipalities nor the other entities audited should draft action plans just for the sake of fulfilling a legal obligation, because the purpose of our recommendations is not to overburden the municipal or central administration with activities that are not important or necessary. So my personal advice is that when drafting action plans, [municipalities] should look at activities that are reasonable and feasible, and second, target realistic deadlines,” Salihu said.

This debate was organised within the framework of the project ‘Support civil society to increase public oversight and accountability of Kosovo public institutions’, funded by the British Embassy in Pristina. This part of the project looks at compliance by institutions with recommendations in the Auditor General’s reports.

Similar debates will be held in other municipalities to present the findings of BIRN Kosovo’s analysis of the implementation of audit recommendations. Each debate will be held at municipal assemblies and will be livestreamed by BIRN Kosovo.