As part of the project recently awarded to BIRN  by the Swiss Cultural Programme in the Western Balkans, Balkan’s Initiative for Cultural Cooperation, Exchange and Development (BICCED), BIRN brought together some of the most active players the cultural scene in Sarajevo and Bosnia-Herzegovina. Danis Tanovic, the movie director, Amra Kresevljakovic from Deblokada, Nihad Kresevljakovic from the festival MESS, Elma Tatarevic from the Sarajevo Film Festival and Amila Ramic from the ARS AEVI shared their views and knowledge of the cultural scene in Bosnia-Herzegovina and the problems facing the creative industries. 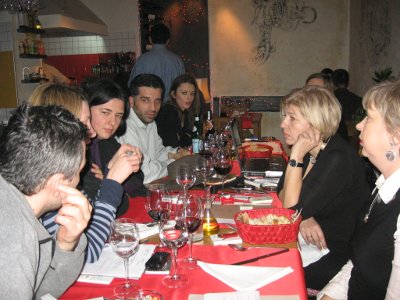 As much as other spheres of life of Bosnia and Herzegovina, the culture is also suffering from the consequences of the division of Bosnia & Herzegovina into largely separate entities. There is no ministry of culture at the state level, and this affects many institutions which are of national importance. The main areas of concern identified by the participants are related to the lack of of a national cultural policy, lack of clear criteria for the allocation of funds, politically-driven support both for organisations and for appointments to leading positions, along with a range of administrative obstacles, VAT policies, ATA Carnet, tax exemption, etc.

The participants gave a valuable input to the creation of an editorial strategy for the programme and provided their views on how the leading players might work together.

Similar meetings will be held in Republika Srpska, and in other countries participating in the project – Albania, Kosovo, Macedonia and Serbia – to arrive at a cohesive and inclusive approach to cultural poly across the wider region