BIRN journalists in Macedonia are being subjected to an incendiary campaign on social networks by supporters of the rightist VMRO DPMNE party. 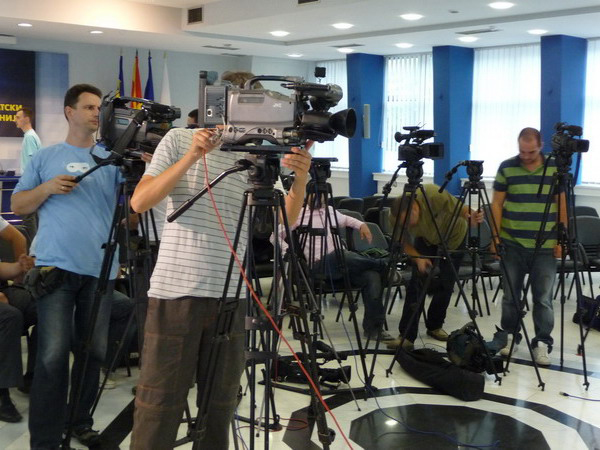 BIRN journalists have been targeted on social networks in Macedonia in connection to Tuesday’s attacks on journalist and cameraman in Skopje who were beaten up while covering a pro-VMRO DPMNE rally.

After BIRN Macedonia journalists published news and tweeted about the attack some Twitter users with generic nicknames accused BIRN journalists of being traitors and mercenaries.

Twitter users with hidden identity took to social networks to defend the VMRO-DPMNE supporters rally claiming that reports of the apparently unprovoked attack were media spin and to blame the victims of the attack for having provoked the crowd.

One user without a name went further, however, and – in what looked like an incitement to violence – published the home address of one of the BIRN journalists with a map.

The case has been reported to Twitter and to the country’s Helsinki Committee for Human Rights who are filing a report with the Ministry of Interior’s department for computer crime. The Association of Macedonian Journalists, ZNM, has also been notified.

“We are closely following and documenting all attacks and smear campaign and will accordingly alert relevant institutions and journalists’ associations,” Ana Petruseva, director of BIRN Macedonia, said.

“Regardless of attacks and threats, BIRN will continue with its investigative reporting and work in the public interest. This campaign further proves the significance of BIRN’s work,” she added.

Civil society groups in Macedonia have faced increasing pressure, from smear campaigns to raids by tax inspectors, ever since the ruling VMRO-DPMNE party in December vowed to rid Macedonia of the influence of NGOs linked to billionaire George Soros, a process it has called “De-Soros-ization”.

Tensions have escalated in the polarized country since December’s tight elections failed to produce an outright winner and since VMRO DPME was unable to form a new government.

BIRN Macedonia has been included in campaigns portraying all independent NGOs as traitors and mercenaries working for Western intelligence services to destroy the country.

The report by three authors, all VMRO-DPMNE supporters, named BIRN as “a Soros proxy” and gave inaccurate information about the funds BIRN Macedonia has received from USAID.

It also labelled BIRN’s online publication Prizma as linked to Soros and to the main opposition Social Democratic Union, SDSM.

The report has been picked up and republished by other pro-government websites in both Macedonian and English.

Macedonia holds the worst rank in the Balkans when it comes to press freedom, with attacks and death threats to journalists in the past.