The pro-government tabloid ‘Informer’ has published a series of allegations about the Balkan Investigative Reporting Network, following its investigation into a secret government contract with the UAE’s Etihad Airways. 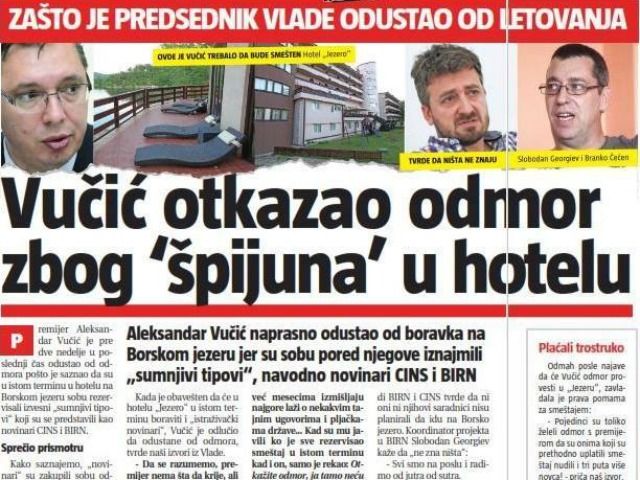 Citing an unnamed government source, the tabloid newspaper claimed that Vucic cancelled his vacation at Serbia’s Lake Bor two weeks ago after learning that “suspicious guys” from BIRN and CINS were staying at the same hotel. “Vucic cancels vacation because of ‘spies’ in hotel,” the headline read.

The allegations follow publication of a BIRN investigation into whether Serbia overpaid for an airline contract with the United Arab Emirates carrier Etihad.

The investigation, published by BIRN and in the weekly Vreme news magazine, revealed that for a 51-per-cent stake in the newly founded company, Air Serbia, Serbia paid several times more than its UAE partner.

The director of BIRN Serbia, Dragana Obradovic, said the tabloid’s allegations were a campaign to discredit the work of BIRN and CINS.

“Nobody was in Bor to spy on the Prime Minister, which is a ridiculous claim, considering that BIRN and CINS are far from paparazzi journalism,” Obradovic said.

Last Saturday, Informer also alleged that the EU was secretly financing BIRN and CINS, which were keeping contracts with the European Commission worth millions of euros.

Obradovic explained that BIRN and CINS won a project through a public call and said that BIRN had not sought to hide the contracts but had directed Informer to the EU mission in Serbia, which has the right to reveal the details.

Informer also insisted that BIRN has denied to respond whether the EU contract imposed what BIRN can and cannot investigate, suggesting the EU has forbidden investigations that involve EU companies.

But Obradovic said that this was also untrue.

“We have explicitly said that the EU does not set the topics we investigate, nor does it forbid certain issues to be looked into as the Informer journalist suggested,” she said.

The day after the BIRN revelations were published last week, Vucic held a press conference at which he insisted that the report was based on an incorrect version of the contract with Etihad. “They must have received some previous drafts,” he said.

He also suggested the investigation was serving the interests of a controversial Serbian tycoon, Miroslav Miskovic, who is awaiting trial for corruption.

Vucic said that Vreme was owned by Miskovic, who has become a symbol of the premier’s anti-corruption drive.

Serbia’s Association of Independent Journalists, NUNS, insisted that BIRN’s and CINS’ revelations about the airline deal were in the public interest.

“In a democratic society it is unacceptable for the PM to discredit media in such a manner in public,” NUNS said last Friday.

At Vucic’s press conference last week he also officially revealed details of the Etihad deal for the first time.

NUNS responded by saying that it was “obvious that the article published in Vreme forced the government and the PM to finally make the Etihad contract public”.

Vreme has meanwhile accused Vucic of “trying to prevent free, objective and independent journalistic work”, comparing his criticism of BIRN and CINS’ probe to his actions as information minister in the government of Slobodan Milosevic in the 1990s.