Lavdim
Hamidi, 26, has won first prize in this year’s Balkan Fellowship for
Journalistic Excellence for his article Power Games Delay Escape from
Poverty. 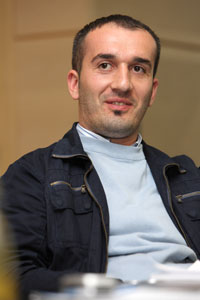 Members of
the Fellowship’s Selection Committee
recognised the quality of Lavdim’s reporting and investigative
elements in his story about mismanagement in Kosovo’s energy sector. In his
article, Lavdim revealed the corruption mechanisms which are damaging Kosovo
economy.
Hamidi, who
works for the daily newspaper Zeri, covering the economy, receives an
award of €8,000, to spend on professional
development.
The award was presented at a seminar in Vienna, hosted by the ERSTE
Foundation and attended by all ten fellows.

Runners-up were second-place
Aleksandra Stankovic, for Dash for Wealth Dooms Wild Frontier and
Mirsad Bajtarevic’s Winds of
Change Blow Past Bosnia which came in at third
place.
The seminar
also marked the launch of a book featuring all fellows’
articles.

Power Struggle: Meeting
Global Energy Challenges in the Balkans
will be distributed in the coming weeks at events to
be held throughout Southeast Europe, and will
also be available online.
Learn more
about BIRN’s Balkan Fellowship for Journalistic Excellence
here.