BIRN Serbia journalists Ana Novakovic, Slobodan Georgiev and Aleksandar Djordjevic have been named as finalists for the National Investigative Journalism Award 2014 by the Independent Association of Journalists in Serbia. 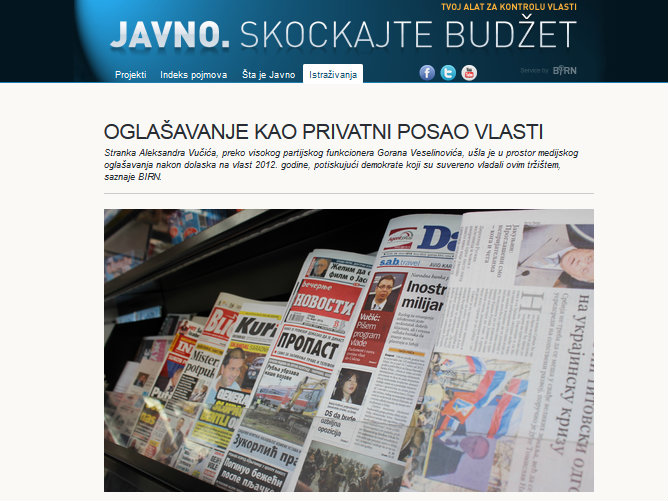 Novakovic and Georgiev were selected in the online media category for their article for Balkan Insight about the Serbian state hiring three private companies to produce material that TV stations use for free without informing viewers that it is not news, but PR.

The investigation showed that the state spent at least €3.8 million over the past nine years, despite already financing two costly public media outlets. The story can be found at http://www.balkaninsight.com/en/article/tv-viewers-force-fed-state-spin

Georgiev was also nominated together with Djordjevic in the print media category for their investigation that showed how Serbian Prime Minister Aleksandar Vucic’s party entered the advertising market after coming to power in 2012, pushing out the Democrats who previously held a dominant influence in this sector.

The article was published in weekly news magazine Vreme, but can also be found online at http://javno.rs/istrazivanja/oglasavanje-kao-privatni-posao-vlasti/

Others nominated in the online media category are three journalists from the Centre for Investigative Journalism in Serbia, Dragana Peco, Jasna Fetahovic and Dino Jahic, who is also a Balkan Fellowship for Journalistic Excellence alumnus.

In the print media category, the other selected journalists are Nikola Lazic from the weekly Vranjske and Jelena Veljkovic, a freelancer.

The Investigative Journalism Award is organised by the Independent Association of Journalists in Serbia and is supported by the US Embassy in Belgrade. The winners will be announced at an awards ceremony in Belgrade on May 8.