The first ‘True Stories Market’ aimed at film and TV professionals at the Sarajevo Film Festival included three stories from BIRN relating to Bosnia and Herzegovina’s wartime past. 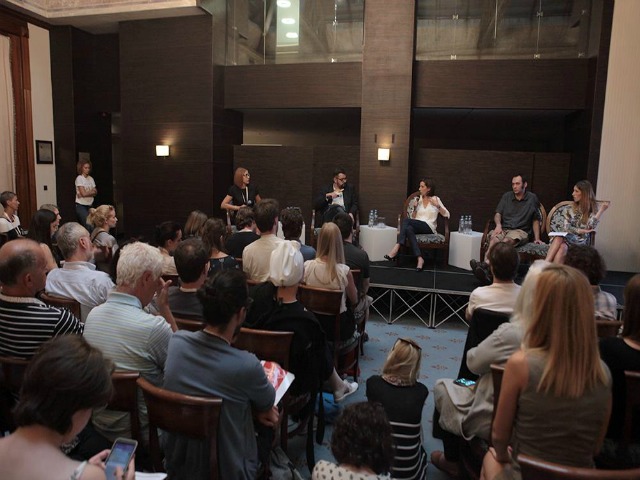 The first ‘True Stories Market’ was held at the 22nd Sarajevo Film Festival on Wednesday as part of the Dealing with the Past project, after a screening of ‘Depth Two’ by Ognjen Glavonic from Serbia.

The market is intended to serve as an inspiration to directors, producers, film and television professionals to turn genuine and rarely-told stories into feature and documentary films.

At the first market, the Balkan Investigative Reporting Network Bosnia and Herzegovina (BIRN BiH) presented three stories, created out of BIRN journalists’ long-term work on dealing with the past, documenting war crime trials and collecting the testimonies of survivors.

BIRN BiH director Mirna Buljugic familiarised the directors and producers with a story about the village of Baljvine, where no conflicts between Bosniaks and Serbs have ever happened, about the phenomenon of how numerous victims of sexual abuse cannot get pregnant, and about one man’s daily search for bones of the victims of the Srebrenica genocide.

A total of seven stories about the recent past and unhealed wounds were presented at the market that the Sarajevo Film Festival organised in collaboration with institutions from Bosnia and Herzegovina, Croatia, Montenegro, Serbia and Kosovo.

The Dealing with the Past project was launched last year under the auspices of the Robert Bosch Stiftung with the aim of using the film industry to intensify dialogue in the region and promote peace through raising awareness and spotlighting indisputable facts about the 1990s conflict.

The project encourages the participation of the public, primarily the younger generation, to foster understanding, acceptance and the tolerance of mutual differences.

The Dealing with the Past project continued on Thursday with screenings of the films ‘The People vs. Fritz Bauer’ by Lars Kraume and ‘Unwanted Heritage’ by Irena Skoric. The screenings are being followed by debates.