BIRN Macedonia has recorded visible successes and made an evident impact with its Project for Investigative Journalism and Cooperation between Media and Civil Society. 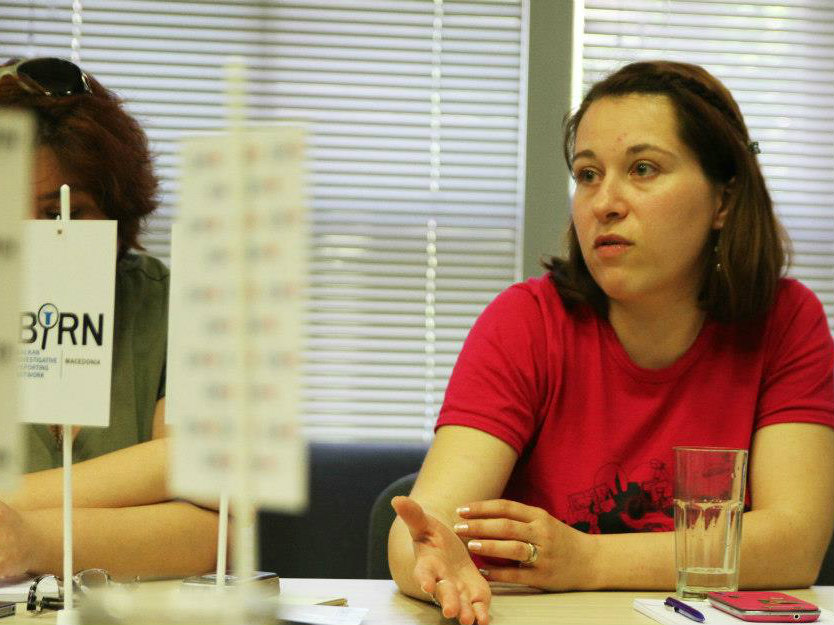 The project, forms part of the USAID Programme for Strengthening the Independent Media in Macedonia.

The first visible results are the outcomes of a series of debates organized over the past three months aimed at strengthening cooperation between journalists and civil society.

Ten common issues were detected at a debate in mid-April where about 90 NGO representatives and journalists debated for almost three hours, suggesting different topics of common interest.

Each debate was based on a specific topic on which journalists and NGO representatives with expertise in the selected topic were invited to share experience and knowledge, discuss obstacles and positive aspects from their cooperation, and share ideas for further, more intense collaboration.

Ana Colovic Lesoska, from Ekosvest, an organization involved in several of the debates, says the meetings were more than necessary.

“I can only share positive impressions from these debates. I was surprised by the number of journalists attending them, especially the debate on the environment, having in mind the complexity of this topic,” she said.

The events provided an opportunity for many organizations working on a local, regional and national level in Macedonia to meet the journalists covering these topics, and so improve communications while boosting their own public profile.

“After a long period there was an article on drug users that did not stigmatize this marginalized group and brought in opinions from various experts in this field,” she noted.

“This article resulted from a conversation I had with a journalist from Dnevnik (a Macedonian daily) at one debate, which was followed by my recommendations for relevant sources and experts. The article was rapidly shared on social networks, and recognized as a rare example of correct media coverage on the topic of the war against drugs,” she added.

“This might look like a small step, but I believe it is a big step forward for journalism in Macedonia,” Cvetkovic concluded.

The debates provided many opportunities for journalists as well. Kristina Ozimec, a young journalist who attended most of the debates, said: “It was an advantage to sit at the same table with activists and people from NGOs and openly discuss all issues, from human rights and education to inter-ethnic relations and European integration,” she said.

“For me, as a journalist, it was helpful to get tips and leads into many of the problems mentioned in the debates, because most of them can be developed into good stories,” she added.

“Hopefully, this cooperation over time will intensify and be more noticeable through higher-quality journalism and the visibility of some significant NGO projects that are important to citizens.”

Ozimec said she had written several articles based on information shared in the debates she attended, such as one on higher education in Macedonia, entitled “More faculties, less knowledge.”

Veteran journalists were also actively involved in the debates. Mence Toci, a journalist with more than 20 years’ experience, awarded at the first call for investigative stories from this same project, used the opportunity to film short interview  with Andrej Senih from HERA on the treatment that patients with HIV and AIDS are having in the hospitals in Macedonia and the risks from the lack of medicine that they are facing. The interview was filmed during the debate dedicated on health.

“These debates were an appropriate place for journalists to address their need of fresh information, studies, analysis and statements that can be used as sources, coming from the NGOS,” she said.

“Journalists these days are in a very tough position, facing a lack of information, especially when it comes to politicians, who usually cooperate only with a few media,” Toci noted.

The Project for Investigative Journalism and Cooperation between Media and Civil Society was lunched in February 2013 and it will end in July 2015.

In the first phase of the project implementation, 11 debates were organized. The first, on April 17, focused on detecting common issues, while the last was on June 20, where the main topic was Macedonia’s EU Integration process.

All debates reached high visibility and outreach by involving more than 200 NGO representatives and journalists as visitors and active participants.

As result of their involvement dozen of articles were published in the media, such as an analysis on internal migration from smaller cities in Macedonia to Skopje, which was published as a result of the debate on the quality of life, and the columns of Koco Andonovski, an LGBT activist working for the Helsinki Committee from Macedonia as well as the column of Magdalena Manevska from the youth organization Center for Intercultural Dialogue from Kumanovo on youth and tolerance.

Asked to sum up the experience of the debates, Cvetkovic said: “These meetings and debates were excellent opportunity for both journalists and civil society representatives to understand and reinforce cooperation.”

Photo gallery from all events is available at the BIRN Macedonia Fan page.