The screening of BIRN’s road-movie documentary The Majority Starts Here in Mitrovica was followed by a debate examining how transitional justice can address the grievances of the wartime past. 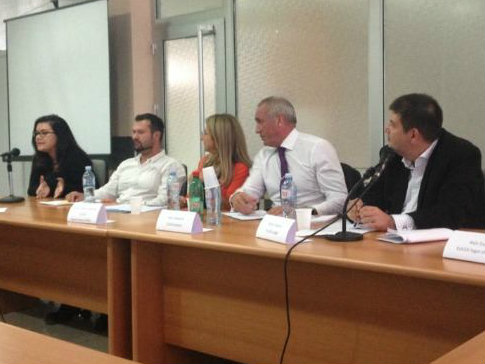 The BIRN film about young people’s interpretations of the recent conflict in the former Yugoslavia was shown for the first time in the north Kosovo town on Monday, followed by a discussion on the issues raised by the documentary, entitled ‘Why Do We Need Transitional Justice?’

The event, organised by the EU Rule-of-Law Mission in Kosovo, EULEX, and the Centre for Peace and Tolerance, brought together representatives of civil society, journalists and the international community to examine what role the judicial process should play in post-war reconciliation.

BIRN journalist Marija Ristic, who was a screenwriter for the documentary, said that the film showed that young people in former Yugoslav countries are poorly informed about the recent conflicts, which happened while they were still children.

“The majority of them knew something about the war in their own country, but very few of them knew the scale of conflicts that took place in their neighbouring countries, and this is what we wanted to change with our documentary,” Ristic said.

“It is hard to show the history of one war in an hour-long documentary, but our message was that even though people still have different opinions about the war, they should sit and talk about that. We have to understand that reconciliation is a process,” she added.

EULEX judge Paulo Teixeira, who worked as a war crime judge in East Timor before coming to Kosovo, said that his long career in the field had taught him that solving post-war issues takes time.

“Things should not be forgotten, but forgiven. War crimes are universal, they take place everywhere… but the difference is not in the war crime itself, but in the way how people deal with that after the war,” Teixeira told the discussion.

Asja Zujo, who worked as a legal officer in Bosnia and Herzegovina and is now with EULEX, said that almost 20 years after the Dayton Agreement that ended the Bosnian war, the process was not over.

“A lot has been done, but there is still space for improvement. War crime trials cannot be the only way of dealing with the past, we have to work on other things as well, such as missing persons, refugees,” Zujo said.

“We still need to rebuild institutions and that remains a problem,” she added.

Alan Edwards from EULEX police also spoke about his experience in conflict zones in Northern Ireland and Cyprus.

“It is very difficult in a post-conflict situation to be fair to both sides in the conflict. But it is important to keep trying. Change takes a lot of time,” Edwards said.

The Majority Starts Here follows six young people from the former Yugoslavia who make a journey through the region, examining how the conflicts of the past, which they were too young to understand fully at the time, have influenced both their present and their prospects for the future.

It was produced by BIRN and directed by award-winning film-maker Lode Desmet, and is part of BIRN’s Balkan Transitional Justice project, which aims to improve public understanding of transitional justice issues in Bosnia and Herzegovina, Croatia, Kosovo, Macedonia, Montenegro and Serbia.