The editor-in-chief of BIRN’s Justice Report, Erna Mackic, was a guest on a BHT 1 television programme dedicated to the 18th anniversary of the Srebrenica genocide on Thursday. 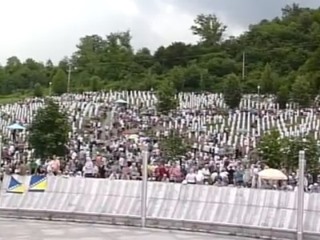 Mackic spoke about possibilities of coexistence in Srebrenica as well as other towns in BiH that were devastated by the war. She also touched upon the processing of war crime cases at courts in BiH and The Hague.

Ignoring verdicts is yet another way of dismissing war crimes and the genocide committed in Srebrenica, Mackic stated.

Alongside Mackic, the other guests included Nina Seremet from the Youth Initiative for Human Rights in BiH and Cedomir Glavas from Bratunac-based NGO Odisej.

All the speakers agreed that Srebrenica genocide should not only be remembered on the annual commemoration day on July 11, but at other times during the year too.

On July 11, BHT 1 broadcast special programming throughout the day dedicated to the burial of 409 Srebrenica victims in Potocari.