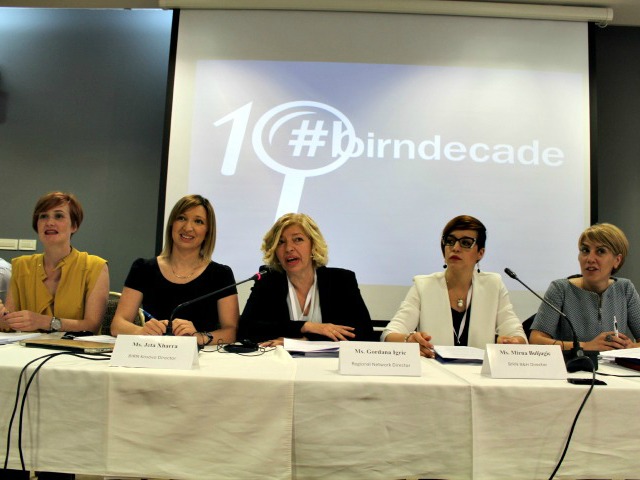 BIRN directors and media experts highighted the main obstacles to media freedom in the region and offered their own recommendations on how to improve the situation at the regional conference of the Balkan Investigative Reporting Network, entitled “Media Freedom Challenges”, on Friday in Sarajevo.

“It is not just media freedom that has been in regression in the Western Balkans over the past years but democracy as well. Each year things get worse, bit by bit, which calls for immediate action before it is too late,” Florian Beiber, from the University of Graz, said.

Beiber presented a list of recommendations to governments in the region to improve the situationof the media. They include stronger legal protection for journalists and curbing the practice of offering them only short term contracts, which keep people working in the media on a tight leash.

A moratorium was also proposed on state advertising, in order to reduce state influence and interference with the editorial policies of media outlets.

Another key recommendation was to establish clearer rules determining the ownership and the finances of media outlets – transparency issues – and prevent monopolies.

Regarding state broadcasters, clearer rules to ensure their independent funding and functioning were urged as a way to keep them out of the hands of governments.

Turning to hate speech and abuse of marginalized groups in the media, better training on hate speech as well as strengthening the power of the courts to tackle such issues was proposed.

The recommendations are a joint drive by more than 30 media professionals and experts who gathered in Sarajevo on Thursday at a regional freedom of expression workshop to discuss: working rights; the state funding of the media and public broadcasters; the the media market; transparency of media ownership; the representation of vulnerable and marginalised groups in the media.

The suggestions presented in Sarajevo will become part of a broader package of recommendations from the civil society sector that will be presented at the Western Balkans Summit in Vienna in August.

BIRN country directors agreed that media freedom was in retreat in their own countries. This can be seen through examples of smears, acts of intimidation, campaigns against independent media and journalists, physical attacks on and threats to journalists, and lawsuits, they said.

David Hudson, from the European Commission, told the conference that Brussels plans to change the methodology of assessing the freedom of the media in the annual progress reports on the Western Balkan countries.

“The new methodology will be more precise, evaluating achievements of governments in key areas on a five-point scale. It will provide an objective comparison is the country prepared and to what degree for membership.

“We have introduced a degree of competition between governments, so that each country can see where it is compared to the region. We hope this will spur reforms,” Hudson said.

He warned that the EU’s leverage in the Western Balkans was not unlimited and depended on the strength of the desire of governments to move the EU accession process forward.

The conference saw a video message by the EU Enlargement Commissioner, Johannes Hahn, in which he congratualted BIRN on its first decade and said that media freedom in the Balkans remained “of particular concern” to the European Commission – particularly the issues of government interference and threats to the independence of public broadcasters.

“We face important challenges that need to be addressed urgently,” Hahn said.

“Apart from government interference, more efforts are needed to ensure the political and financial independence of public service broadcasters, the strength and independence of regulatory agencies and faster functional self-regulation,” he said.

“There is also need to tackle informal economic pressure on the media. This includes transparency of media ownership and preventing of its excessive concentration. Last but not least, transparent roles on the procurement of government advertising have to be in place.”

The Commissioner said he would keep pushing governments in the region on these issues.

The “Media Freedom Challenges” conference is a part of BIRN’s 10th anniversary celebration.

“This day is very emotional for us. Ten years ago, a handful of people met in this town [Sarajevo] and agreed to form BIRN on the shared belief that we should nurture good journalism, and work to change something,” BIRN’s regional network director, Gordana Igric, said in her address to the conference.

Ten years on from those humble beginnings, the BIRN network employs over 200 journalists and media professionals.

BIRN today has a presence across the Balkan region, with country-based organizations in Albania, Bosnia and Herzegovina, Kosovo, Macedonia, Romania and Serbia, as well as correspondents in Montenegro, Croatia, Bulgaria, Greece and occasionally Moldova.