BIRN Bosnia and Herzegovina’s deputy editor Denis Dzidic participated in a Helsinki Committee for Human Rights in Republika Srpska education session in Bijeljina this week, an event being held from May 20-24 under the banner ‘Transitional Justice in Universities’. 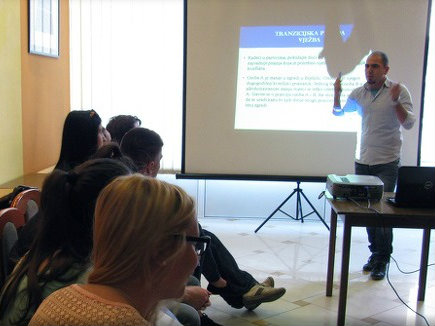 It was the third such seminar organised by the Helsinki Committee for Human Rights in Republika Srpska and funded by the Norwegian government.

Dzidic gave the opening lecture, an introduction to transitional justice. He discussed the four pillars of the concept – the right to justice, truth, reparations and institutional reforms – and talked with the students about why all of them had a vital role to play in order that Bosnian society overcomes the divisions caused by the 1990s war.

During the week, the students will also have an opportunity to hear from Refik Hodzic, communications director at the International Centre for Transitional Justice, and learn about the experiences of other countries in the field.

Dzidic and BIRN BiH will continue to be involved in the project and future education sessions held as part of the ‘Transitional Justice in Universities’ project.