BIRN director Gordana Igric participated in TransConflict’s working breakfast on Tuesday, December 4,  together with Nemanja  Stjepanovic from SENSE agency,  on the challenges of  covering transitional justice issues in the former Yugoslavia. 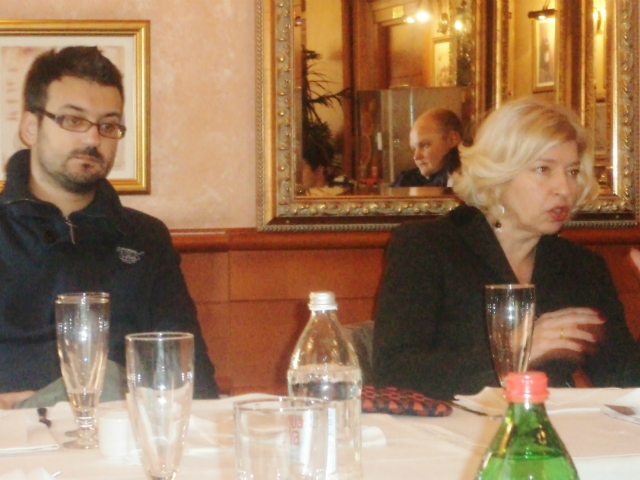 Both speakers agreed that the acquittals by the Hague Tribunal, ICTY, of Ante Gotovina and Mladen Markac of crimes against Serb civilians during the Croatian Army’s Operation “Oluja” [“Storm”], as well as the acquittal of Kosovo’s Ramus Haradinaj of war crimes against Serbs and non-Albanians during the Kosovo war, posed challenges when it comes to facing the past in the region.

Stjepanovic said that while the acquittal of Haradinaj was to be expected owing to the lack of fresh evidence on the part of the Hague prosecution, the EULEX mission in Kosovo and the Serbian government, the acquittal of the Croatian generals was more surprising as their indictment was supported with strong evidence.

Both speakers agreed that in both cases, the defence had been much more efficient than the prosecution.

Igric said that although the ICTY verdicts would surely affect relations between countries in the region, Serbia’s government remained determined to start membership talks with the EU.

The public saw the ICTY verdicts as backing the Croatian narrative about a defensive war, which Serbs saw as unfair, Igric noted.

TransConflict is a non-governmental organisation which undertakes conflict transformation projects and research, promoting an approach to – and understanding of – conflict that differs from traditional notions of conflict resolution.

Working breakfast – on the challenges of transitional justice in the former Yugoslavia – was organized as part of its project, ‘Understanding and combating extremism in Serbia’.