A Belgrade based far right group has requested that all the country’s NGOs and media funded from abroad, including BIRN, be labelled as “foreign agents”, based on a Russian model. 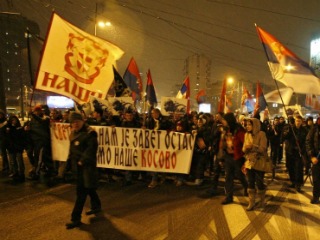 On Friday, the Serbian far-right movement “SNP Nasi” called on the authorities to pass a law that would label all NGOs and media outlets that addressed politics and were financed from abroad as ‘foreign agents.’

“After submitting its evidence, SNP Nasi will demand that non-governmental organizations and the media blacklisted for committing criminal and unconstitutional acts be legally banned and prosecuted,” the movement said in a statement.

According to the statement, these organisations are funded by the US government and the “infamous National Endowment for Democracy Foundation”, which operates as an organization for conducting special operations on behalf of the CIA.

The statement also said that NED had been blamed in Latin America for “creating structures aimed at interfering in the internal affairs and undermining the constitutional order [of nation states]”. In Russia, the foundation is treated by law as a foreign agent.

Earlier this month, the group called on the authorities to outlaw 17 NGOs, which it said had violated Serbia’s constitution.

SNP Nasi is known in Serbia for promoting the idea of a Greater Serbia and inciting violence ahead of Gay Pride parades. Prior to the cancellation of the Belgrade Pride Parade in October, SNP Nasi demanded that such events should be banned for 100 years.