On Tuesday, April 19, the Balkan Investigative Reporting Network (BIRN) and Internews Kosova held a roundtable to launch and discuss the most recent publication by BIG DEAL,  a civic oversight initiative on the Kosovo-Serbia negotiations. 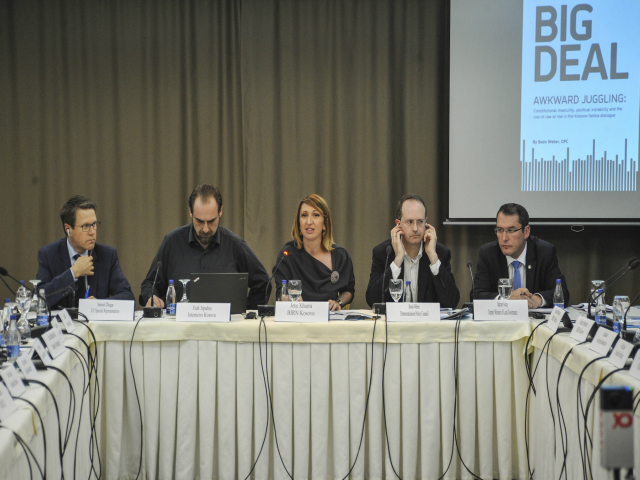 Three years since the ‘historic’ “First agreement on principles” was signed in Brussels by Ivica Dacic and Hashim Thaci, only four of sixteen agreements have been implemented.

On the other hand, the formation of the Association/Community of Serb-majority municipalities poses challenges for Kosovo’s political stability, its rule of law, and for the credibility of the European Union, the BIG DEAL report argues.

“By making the dialogue their top priority, the EU and the US have constantly tolerated the weakness of democracy and the rule of law in Kosovo. Yet the damage inflicted on both as a consequence has risked to undo even the limited progress achieved in the dialogue so far,” said Bodo Weber of the Democratization Policy Council, the author of the report. “Therefore the US and the EU need to demonstrate full commitment to and respect for the constitutional and legal foundations of the state of Kosovo in the framework of the Serbia-Kosovo dialogue.”

The report, entitled “Awkward Juggling: Constitutional insecurity, political instability and rule of law in the Kosovo- Serbia dialogue” examines the way forward for the implementation of key agreements in the wake of the December ruling by Kosovo’s Constitutional Court on the general principles of the future Association/Community of Serb-majority municipalities.

The report calls on the European External Action Service to “engage international experts on the topics of constitutional law, forms of positive discrimination in multi-ethnic polities and on local self-governance to participate in the process of drafting the Statute of the future Association/Community of Serb majority municipalities.”

Panelists, including the EU representative in Kosovo, Samuel Zbogar and Jelena Milic from the Center for Euro Atlantic Studies, also discussed the current stagnation with implementation of agreements in general.

“It is unfortunate that, similar to six months ago when we presented our comprehensive monitoring report, only four of 16 reached agreements have been fully implemented,” said Faik Ispahiu, Executive Director of Internews Kosova. “Five years after the Kosovo-Serbia dialogue began, Kosovo and Serbia are refusing to recognize one another’s diplomas. The draft law on cadastre has been blocked for two years with no progress, and Kosovars still don’t have an operating telephone code despite the fact that not one, but two agreements have been signed about this very topic.”

Samuel Zbogar, EU representative in Kosovo stated that their job was to facilitate the process and believed normalization was in Kosovo’s interest.

However, we warned that with the political situation in Kosovo, there is a need to build wider political consensus around the dialogue.

“Although it has been plainly stated by members of the Serbian government that their top priority is the formation of the Association/Community, this should not be the condition for the implementation of other agreements that were signed long before the 19 April 2013 agreement,” Xharra said. “The fair implementation tempo should push for the agreements to be chronologically implemented: those that were signed first should be fully implemented first.”

Moreover, said BIRN Kosovo Director Jeta Xharra, EU and US diplomats need to send clear signals to both Prishtina and Belgrade that the implementation of all other pending agreements is just as important as the one on the Association/Community.

BIG DEAL is a platform for civic oversight of the Kosovo-Serbia dialogue led by BIRN Kosovo, Internews Kosova and BIRN Serbia. Members of BIG DEAL include the Advocacy Center for Democratic Culture (ACDC) of North Mitrovica. The Belgrade-based Center for Euro-Atlantic Studies, and the Berlin-based Democratization Policy Council.

“We as BIG DEAL have demanded that delegations of Serbia and Kosovo bring down the cost of travel because it was costing a fortune for people to cross the border from one neighbour to another – today, I am glad this cost has come down significantly,” said Maksic.