In recent weeks, some of the most prestigious media around the globe have quoted or republished articles from BIRN’s flagship publication Balkan Insight, reaffirming its position as a source of trusted news from the Balkans for an international audience. 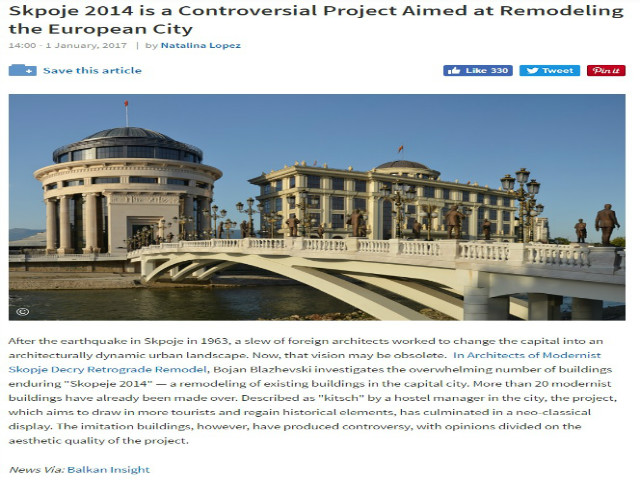 The New York Times has included several Balkan Insight stories in its overview of European affairs in the last two weeks alone, including a Bulgarian investigation on whether a local arms company broke the embargo on exporting weapons to Syria and two reports about war crimes and transitional justice issues.

Balkan Insight stories are regularly featured in the BBC News website’s section News From Elsewhere section. Most recently highlighted was the article Bulgarians Listen to Classics Thanks to Copyright War, published on January 5, about a dispute over fees with the Bulgarian copyright society that has forced the national radio station to play only music produced before 1945.

The story about the notorious architectural makeover of Skopje, Architects of Modernist Skopje Decry Retrograde Remodel, published as part of the 2016 Fellowship for Journalistic Excellence, was presented on the ArchDaily website, which attracts 10 million visits every month, on the first day of 2017.

Another controversial urban reconstruction topic from the region, the Belgrade Waterfront project, gained international attention in a Forbes story published in December 2016, which referred to the Balkan Insight report about eviction of the last family living in the area.