Jury says it had a tough time evaluating the three best investigations out of a short list, as all three had the most important characteristic of good investigating journalism – ‘digging deeper under the surface’. 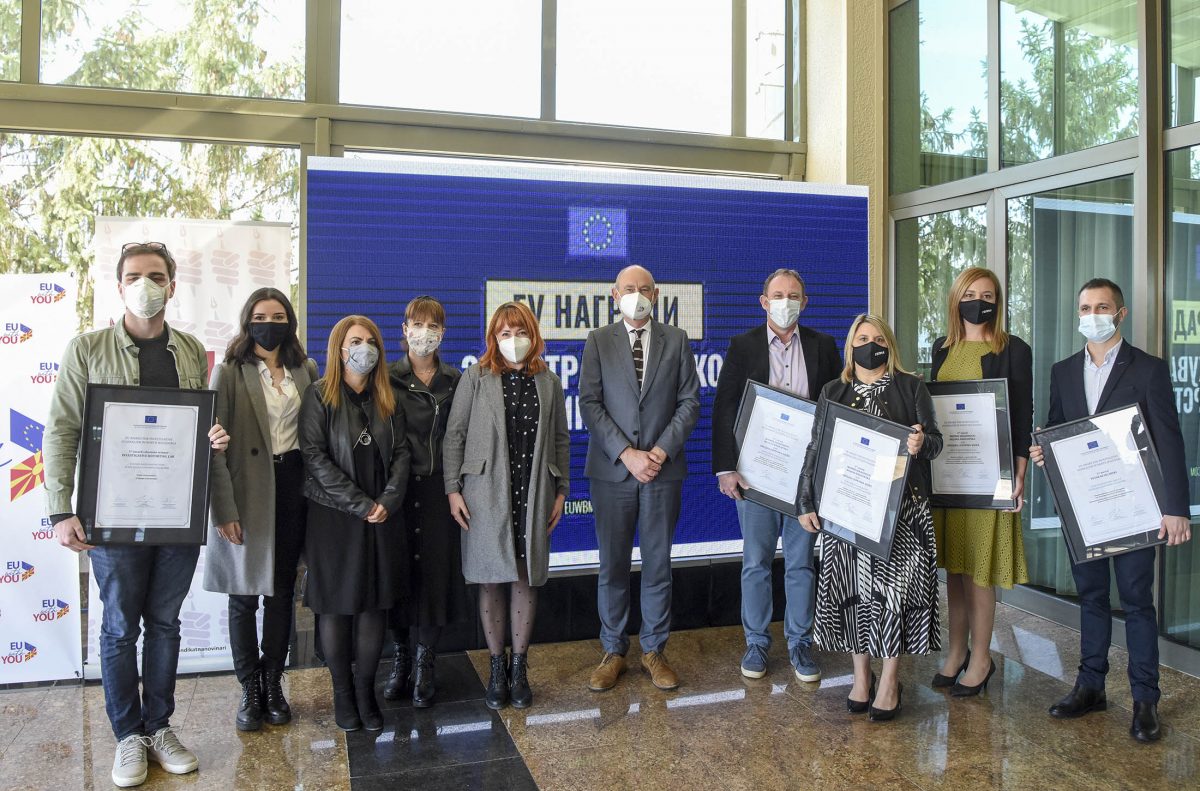 The EU Awards for Investigative Journalism for North Macedonia were presented to the winners on Thursday at the Aleksandar Palace Hotel in Skopje.

“This award aims to recognise the specific work of investigative journalists during the year,” David Geer, Head of the EU Delegation in Skopje, said at the ceremony.

“It aims to promote both freedom and responsibility – freedom to investigate and write about issues of public concern without fear – fear of punishment or reprisals. Responsibility: because there is a responsibility on all journalists – and the investigative journalist in particular – to apply the highest professional and ethical standards in their work,” he added.

“We had great responsibility before us,” Nikodinoska said: “We received 11 stories that passed the first selection phase out of 24, and tried our best to be objective. All three stories have the most important characteristic of investigative journalism – digging deeper and under the surface.”

She added: “I encourage journalists to work on investigations, because investigative journalism in this era of pseudo-media is needed more than ever in our developing democracies.”

First prize this year went to the Investigative Reporting Lab Macedonia, IRL, for “Urban Assassins”, which the jury deemed a product of outstanding research.

“What was important for this story was a multi-disciplinary approach. Young directors, animators and most important young journalists all worked on this story. But cooperation with state institutions was also very important as was the reaction of citizens,” Saska Cvetkovska, from IRL, said.

Second prize went to Snezhana Lupevska Sozen, Miomir Serafinovic and Biljana Nikolovska for a justice-related investigation, “Murders in Kicevo – convicted for life and declared guilty for a murder he did not commit.”

“It was hard working on this story having in mind that it needed a lot of ‘digging’, contacts and traveling,” Serafinovic said after receiving the award.

“However, it is much harder for the prisoner for whom this story speaks, who is serving a life sentence, because despite all of our investigation and stories, we did not succeed in awakening the justice system to reconsider all the evidence we presented,” he added.

Third prize went to Petar Klincarski for “Denationalization stuck in corruption and incompetence of the institutions”.

“The process of denationalization, as you have seen, is full of inefficiency and the incompetence of institutions,” Klincarski said.

“There were indications of unlawful behaviour and misuse of power. What is most important is that there is no political will for solving open cases of denationalization and for clearing up suspicions of misbehaviour.”

The award for investigative journalism is awarded through the EU-funded project “Strengthening Quality News and Independent Journalism in the Western Balkans and Turkey” in 2019, 2020, 2021 in EU candidate and potential candidate countries: Albania, Bosnia and Herzegovina, Kosovo, Montenegro, North Macedonia, Serbia and Turkey, for investigative stories published between 2018 and 2020. In total, 63 awards will be awarded through a three-year period.

The award in North Macedonia is coordinated by the Independent Trade Union of Journalists and Media Workers in North Macedonia, SSNM, while the regional consortium is led by Balkan Investigative Regional Reporting Network – BIRN Hub.