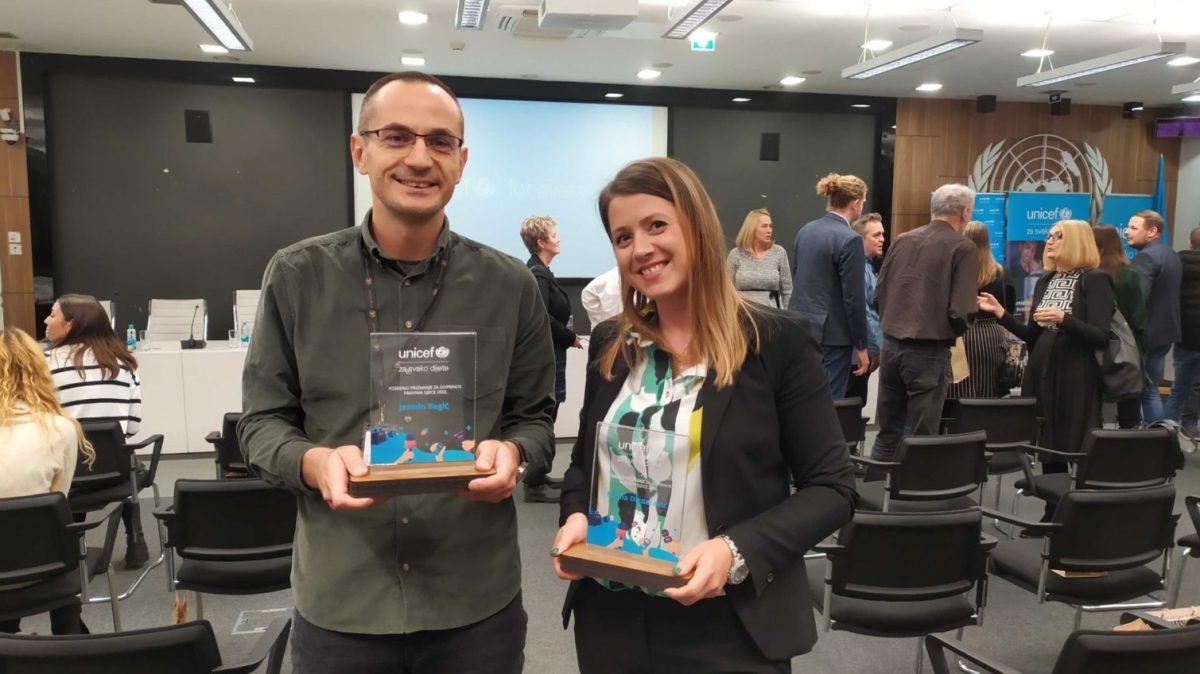 Dizdarevic received special recognition for her analysis, “Experts Warn that New History Textbook in Tuzla Deepens Divisions”. In it, she explained that, as of April, elementary school pupils in the Tuzla Canton have learned about the 1992-5 war in more detail for the first time through a new appendix to the history textbook for grade nine, which experts call one-sided.

They say it contains a publication by a convicted war criminal as a reference, and fails to respect the guidelines for writing textbooks and mention the suffering of all peoples, thus additionally deepening divisions.

Dizdarevic, who has been a journalist with BIRN for nearly ten years, says the recognition of her contribution to child’s rights in 2022 is very meaningful; the UNICEF award speaks about the educational system in her country and points to the problems of unadjusted school curricula.

“I’m glad if I have contributed, at least at the micro level, to changing the situation in the Bosnian educational system. I believe children should learn and study history and the 1992-95 war in Bosnia and Herzegovina precisely from judicially determined facts,” she said. Dizdarevic previously also won the Srdjan Aleksic and other awards.

Begic joined BIRN’s team in July 2021. He received UNICEF’s special recognition for an analysis, “Central Bosnia Canton Does not Respect Verdict on Abolishing Segregation in Schools”, about the failure to respect court verdicts due to which pupils throughout Bosnia spent yet another school year in a segregated system.

“I’m grateful for the recognition which is, at the same time, an incentive and obligation for even more devoted and professional work in the future,” he said.

UNICEF’s contest for best media contribution to the promotion and protection of child’s rights in Bosnia was open for all journalists who published articles on this topic in Bosnian media this year.

An award for overall contribution to promotion and protection of children’s rights during 2022 through journalistic pieces, articles on portals, blogs, TV or radio footage, vlogs or documentary, was given to Istinomjer journalist Minel Abaz again this year.

Jury member Boro Kontic said that 23 pieces on various topics, including emotional difficulties, influencers, religious teaching, child migrants, talented children, violence in schools, segregation in schools and curricula content, were submitted for the competition; all of them were of good quality.

UNICEF’s representative in Bosnia and Herzegovina, Rownak Khan, gave credit to those media that cover children’s rights through their channels, adding that the award was a recognition of journalists who cover these important topics in a courageous manner.

She said the public can be informed about children’s rights through the media more than in any other way, adding that on International Children’s Day, every November 20, it is important to recall the promise states made by adopting the Convention on the Rights of the Child more than 30 years ago, Fokus reported.

In 2020, BIRN BiH journalist Azra Husaric-Omerovic received UNICEF’s recognition for contribution to promotion and protection of child’s rights in Bosnia and Herzegovina in the “internet piece” category for her story on the challenges children with learning disabilities and their parents faced while attending online classes during the pandemic.