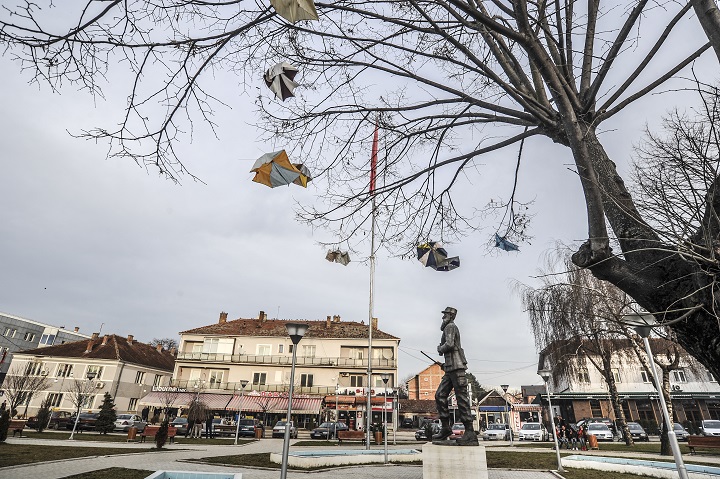 Will the next Mayor of Viti manage to solve its problems?

Four men are vying for the position of mayor of the Municipality of Viti.

The three candidates running against current mayor Sokol Haliti are millionaires. The candidate from the Alliance for the Future of Kosovo, AAK, Nura, is a businessman.  A slightly less wealthy candidate is Besim Halimi from the Democratic Party of Kosovo, PDK, who claims that his wealth exceeds millions.

Salih Salihu, from Vetevendosje, has real estate worth 2.2 million euros and is also running.

Although Viti, inhabited by around 47 thousand people, has a department of gynecology, women in this municipality give birth in other cities, considering that is impossible within the municipality of Viti.

KALLXO.com’s research reveals that Viti has enourmous problems with illegal landfills, drinking water and sewage. The education system is not good either. The municipality of Viti has only one public kindergarten, and only one physical education hall.

The municipality of Viti has a budget of about 10 million euros per year.

The GAP Institute states that Viti has issues in providing healthcare. According to GAP’s data, a doctor in Viti serves 308 residents, unlike the average of other municipalities, where a doctor serves 288 residents.

Apart from insufficient staff, Viti also does not have enough space to take care after those in need. KALLXO.com’s investigation shows that those who must be on dialysis have to travel to Gjilan or Ferizaj in order to receive hemodialysis services, considering there is no department dealing with the treatment of these persons.

Although there is a gynecology department in Viti, there are no births taking place there, only check-ups.

Women of Viti must travel more than 21 kilometers to the Gjilan’s hospital or that of Ferizaj in order to give birth.

On the other hand, the Pozhoran village has more than four thousand residents; there are health centers that were built during the current mandate, but there is no dentist. The residents of this village told KALLXO.com that they are in need of a team of dentists. Even though the municipality has not provided the health centers with any dentists, three private clinics are currently functioning in this village.

For the first time in Viti’s history, a football club has managed to play in the local football superleauge. Pozhoran’s KF Vllaznia is playing this year  in the Kosovo football elite; however, the matches are not taking place at its stadium. This is due to the poor infrastructure of the stadium. KF Vllaznia is forced to play matches at the stadium of Gjilan, and Viti’s residents are not able to watch their home team matches.

In addition to not being able to watch the KF Vllaznia matches at their own stadium, Viti residents are also not able to attend theater events, since the Municipality lacks a theater. Viti was a grantee for a 3D cinema donation, but it has not been functionalized.

Viti also has an Olympic sports player. Last year, Urata Rama was one of the eight Olympians who presented Kosovo at the Olympics in Rio, Brazil. However, Urata lacked institutional support. In 2016, the municipality provided her with an amount of 959 euros in subsidies during her stay in Rio, which translates into about 80 euros per day.

Although the center of the city creates the impression of a completely clean municipality with no landfills, this, this changes when one visits other areas across the city.

KALLXO.com has found that there are over 20 illegal landfills in the Municipality of Viti. This was also admitted by the municipal officials themselves.

According to municipal officials, they have gotten rid of some illegal landfills, but they haven’t managed to completely eradicate them yet.

The General Auditor has stated that although the Municipality of Viti has allocated student scholarship funds, it has decided not to allocate the money to the students, but to keep them for itself instead. KALLXO.com found that the scholarships planned for the academic year 2016/2017 were only distributed in July 2017. Therefore, 135 students were granted their scholarships late. According to the municipal officials, the scholarships were provided within the academic year; however, the students already finished their exams in June.

There is only one public kindergarten and one other private kindergarten in the municipality of Viti. According to municipal officials, they have the space for kindergarten buildings, considering that they may use a part of a school for it, but they also state that they lack funds to pay the staff.

KALLXO.com’s investigation shows that in other villages of the municipality, there are problems with water supply systems, which are not managed by Hidromorava. According to the data provided, areas that remain connected to water supply, and are not managed by any company are: Letnicë, Shashare, Skifteraj, Begunce, Kabash, Binqe, Shusht, Terpeze, Budrike and Zhiti.
The village of Tërpezë is already contracted but there is no sewerage network; in the village of Begunce, Ramnishtë and in the eastern part of Viti, the sewage network is only 50 per cent completed. Villages that do not have septic tanks, and consequently, have issues with sewage are Devaja, New Village, Upper Budrika, Goshica, Verbani, Sodovina and Ceret, Tresteniku, Lubishte and Kabashi.