Polish journalist Dariusz Kalan was awarded the first prize for the 2020 Fellowship for Journalistic Excellence, at a ceremony held in Vienna on Thursday. The ceremony – delayed because of the pandemic – celebrated the successful completion of the programme. 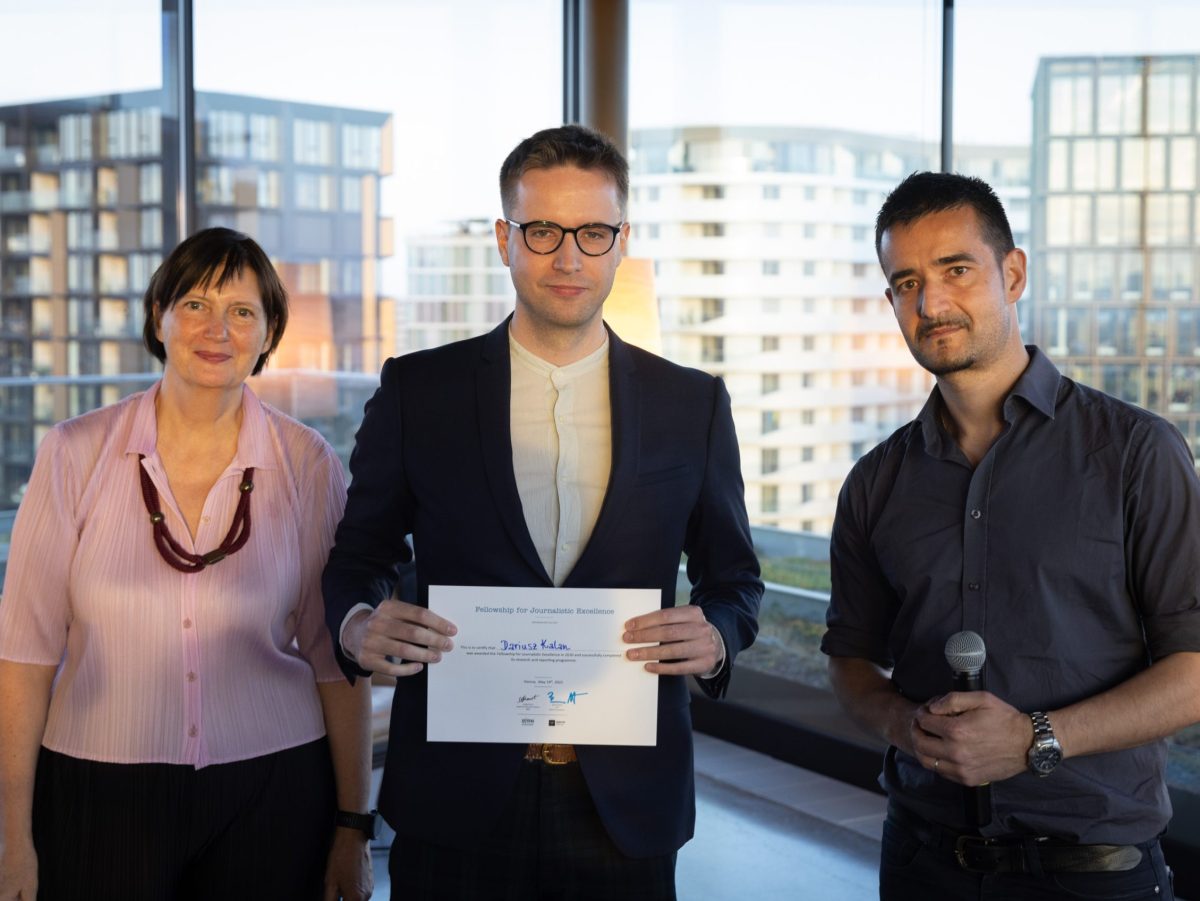 Kalan won the award of 3,000 euros for his investigation into the legal process arising from a minor road traffic accident involving the Polish prime ministerial limousine and a Fiat. The court case has dragged on for some five years, exposing a catalogue of incompetence and political interference within the Polish judiciary.

Instead of awarding prizes for second and third place, the jury this year decided to distribute the rest of the award fund between three journalists.

“We could not decide between the three of them because there are all good stories,” said Milorad Ivanovic, representative of the Fellowship alumni group in the Jury. “Each jury member had its preferences, and strong arguments for each of them. After three rounds of voting they still had an equal number of votes, and we just felt that this was the fair solution.”

The top prize was awarded to Kalan for the story, The Car Crash That Bent the Wheels of Polish Justice. Through meticulous reporting, he offered a ground-level view of the erosion of judicial independence in the case of a collision between a Fiat, driven by a student, and the prime minister’s limousine.

“Dariuz Kalan reveals what it means for an individual citizen when judicial checks and balances are undermined – you can become powerless if you clash with the powerful,” said Adelheid Wolfl, South Eastern Europe correspondent for Austrian der Standard. “He shows how important it is that we all look very carefully when the substance of democracy and the rule of is undermined in an EU member state like Poland. The storytelling also had a great rhythm, with an instinctive feel for the language.”

Klodiana Lala, TV crime reporter from Albania, won the price for a clearly written, sensitive and un-sensational treatment of Balkan drug gangs. Her investigation Albanian Crime Story: Hostage to the Cocaine Supply Chain, looks into the gruesome kidnap and murder of a furniture-store owner from Tirana, combining it with a broader picture of the growing cocaine market in Europe.

“Klodiana’s story offers an insight into the operation of Albanian organised crime groups through the tragedy of a family. Her report, based on court documents and interviews, avoids cliches and has a clear style and a logical structure”, said Gyula Csak, a BIRN editor and member of the Fellowship jury.

“The special value of Marija Vucic’s research lies in the fact that she not only shows the dangers of fake news, but also identifies and confronts those who are significantly involved in the spread of fake news. The political leaders in Serbia should read Vucic’s excellently researched and composed story and draw their conclusions,” said Elena Panagiotidis, editor of Swiss daily, Neue Zürcher Zeitung.

The prize also went to Greek freelance reporter, Iason Athanasiadis, for the story The Accidental Death of an Anarchist. The story looks at the Greek state’s failure to investigate a police assault on an anarchist and the evolving use of the police to tackle public protests.

“Iason Athanasiadis reported with sensitivity and courage on an extraordinary case of police brutality, the tragic death of a young Greek man, and the complex connection between the two. The reader is drawn into a capturing story about powerlessness and violence in the Greek anarchist milieu”, said Kristof Bender, deputy chairman of the European Stability Initiative.

Ten journalists from across the Central and Eastern Europe were awarded fellowships in 2020, and have completed the program under exceptional circumstances that have affected every aspect of their work. Their stories were published throughout 2021, under the topic, Rule of Law.

They were all praised by the jury as exceptionally strong group of authors. “This was a phenomenally capable group of journalists who produced excellent work in exceptionally trying circumstances. While four have won prizes for their stories, plaudits are due to each and every one of them for producing stories that will stand the test of time.”

With the conclusion of this year’s programme, the 10 fellows join the FJE alumni network, which consists of more than 150 journalists from 14 CEE countries, who promote the highest professional standards.

The Balkan Fellowship for Journalistic Excellence was launched in 2007 to promote high-quality, cross-border reporting. The programme provides fellows with financial and editorial support, allowing them to travel, report and write their stories and develop their journalistic skills. In 2020, the fellowship programme expanded to include journalists from the Visegrad Four countries of Czech Republic, Hungary, Poland and Slovakia.

The Fellowship for Journalistic Excellence is implemented by the Balkan Investigative Reporting Network and supported by ERSTE Foundation.