Adam Santovac, Jelena Veljkovic, Aleksandar Djordjevic, Nemanja Rujevic, Sanja Kljajic and Ajdin Kamber were announced on December 29 as the winners of this year’s EU Awards for Investigative Journalism, given for stories published in 2019 in Serbia. 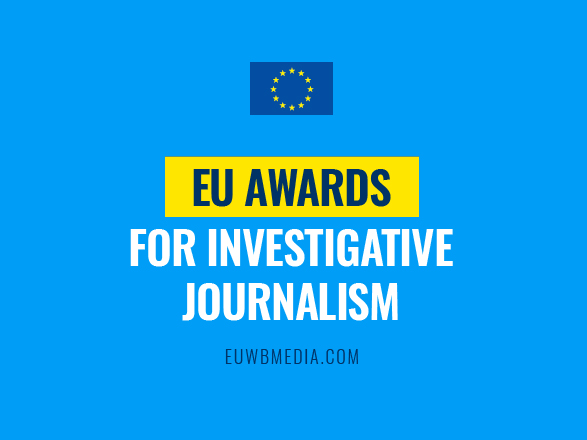 The first place for the best investigative story published in 2019 and a cash prize of 5,000 euros went to Adam Santovac for the documentary ‘Super Graduate’, which was broadcast by N1 TV.

The jury said that ‘Super Graduate’ was a very important investigation about corruption in the higher education system, “an area in which the consequences are long-term and unforeseeable, and essentially affect all segments of life in the country”.

The jury praised Santovac for his “in-depth research of numerous, difficult-to-access data outside the borders of Serbia”.

“I think the key to the success of the documentary ‘Super Graduate’ is in its simplicity,” Santovac said in a recorded acceptance speech.

“So, working on this documentary, I managed to fulfill the most basic journalistic function, and that is not only to ask, but also to help people find answers to certain questions,” he added.

BIRN Serbia journalists Jelena Veljkovic and Aleksandar Djordjevic were awarded second place and a cash prize of 3,000 euros for the series of articles about the so-called Krusik affair, which centred on alleged corruption at the state-owned Krusik arms company.

The jury said that Veljkovic and Djordjevic “managed not only to point out direct links between top public officials and serious abuse, but also to prove the existence of the entire system in which the state appears as a guarantor in dirty business”.

The two journalists dedicated the award to Aleksandar Obradovic, a whistleblower from the Krusik factory who first spoke out about the alleged wrongdoing.

The third place and a cash prize of 2,000 euros went to Deutsche Welle journalists Nemanja Rujevic, Sanja Kljajic and Ajdin Kamber for their story ‘The Industry of Leaving’, which dealt with the emigration of health workers and the corrupt practices that are rife in labour emigration.

“The authors, through a very detailed and comprehensive research, discovered and proved the existence of a whole new industry in Serbia which is export-oriented and does not bring benefit to the people living in that country, but takes away quality health workers and care,” the jury said.

Paul-Henri Presset, the head of the Information, Communication and Press Department at the EU Delegation to Serbia, said in a video message that the media plays an even more important role in disseminating reliable information in times of crisis, such the current pandemic.

“At the same time such vulnerable times inevitably open large space for disinformation, a trend that societies will be combating increasingly in the time to come. This is why it is particularly important that we have strong and capacitated media and journalists putting additional efforts in investigating facts on topics important for society,” said Presset.

The shortlisted investigative stories were evaluated by an international jury consisting of Predrag Blagojevic, founder and former editor-in-chief at Juzne Vesti, Valerie Hopkins, south-east Europe correspondent for the Financial Times and Bojan Pancevski, Germany correspondent for the Wall Street Journal.

The EU Awards for Investigative Journalism in Serbia is part of an ongoing EU-funded project entitled Strengthening Quality News and Independent Journalism in the Western Balkans and Turkey, implemented by BIRN Hub in partnership with Thomson Media gGmbH (TM), the International Federation of Journalists (IFJ), the European Broadcast Union (EBU), Central European University (CEU CDMS), the Media Association of South-East Europe (MASE), the Center for Investigative Journalism of Montenegro (CIN CG), the Independent Trade Union of Journalists and Media Workers (SSNM), BIRN Albania and BIRN Serbia. The aim of the project is to empower and support independent journalism and investigative journalists.

BIRN Serbia, as part of the consortium, provides technical support to the project but is not involved in the selection of awarded articles.